After visiting the Colosseum and the Roman Forum, if you walk towards the city center,  you can’t help but noticing this monument, which represents the Italy of the last two centuries with its majesty, cultural and historical significance. For instance, it was in this square where Mussolini appeared to give his speeches to the nation. Also, from this square start two of the most important and famous streets of Rome: Via dei Fori Imperiali and Via del Corso. It is in this square where Il Vittoriano was built in 1885.

Il Vittoriano was designed and planned by Giuseppe Sacconi, a young inhabitant from the Marches, who in 1882 won the competition published in honor of Victor Emanuel II¹, who had died four years before.

Sacconi decided to represent the topics of homeland and unification both allegorically and geographically. It is possible to find the following sculpted groups: Thought, Action, Concord, Strenght, and shortly after the Adriatic and Tirrenian fountains, the quadrigas of Unification and Freedom that look down to the statues representing the Italian regions.

Sacconi was inspired mainly by the big Greek sanctuaries and that’s why Il Vittoriano was designed as a forum open to citizens and in an elevated position with respect to the square, symbol of Italian Unification.

The monument was built from corpse-white marble, rather than from travertine as originally expected. The works started in 1885 after many expropriations and demolitions of the adjoining areas. Exactly these two facts -the choice of corpse-white marble and the demolitions- were for many years two of the main and harshest criticisms to the project and to the architect.

The construction of il Vittoriano was hard labor due to the costs of the works: from 9 million lire, the expenses went up to 30 million because the whole Venice Square had to be rebuilt. 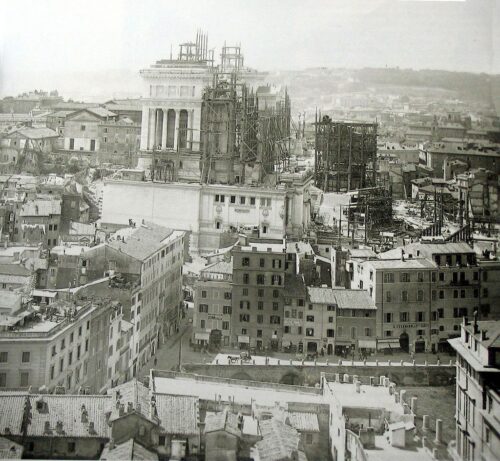 At the center of the monument, it was placed an enormous statue representing King Victor Emanuel II, a bronze work by Enrico Chiaradia.
The statue is 12 m high, 10 m long, and weighs 50 tons. Including the marble base, the entire sculptural group is 24.80 m high.
To give you a better idea of how big is the statue check the picture of its inauguration, when 20 men had dinner inside the horse’s belly. 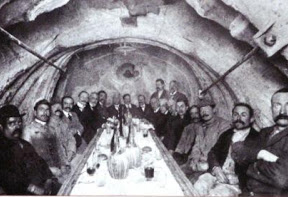 In 1911, after well 26 years of works, Victor Emanuel III inaugurated the complex. Between 1924 and 1927 the quadrigas of Unity and Liberty were added. It wasn’t until 1935 when the works were finally finished.

As we have said, the history of Il Vittoriano is linked to the history of Italy. In 1969, after an attack, the entire complex was closed to the public. It was Carlo Azeglio Ciampi, in 1997 who reopened it proposing it as a new forum for Rome: “I reopen this extraordinary terrace of Rome, our capital, on top of a monument that is becoming the central meeting point of every Roman with the eternal city”.

In the last years, thanks to the reopening in the nineties, the whole complex increased in value, appearing as an example of the art of the first decades of National Unification, a wonderful fusion of art nouveau, eclecticism, and neoclassicism.

Anyone who visits Rome loves this monument and this is the reason why we include Venice Square in some of our tours, such as our beautiful Rome and Vatican in one day tour and our Jewish Ghetto tour.