During our Colosseum, Roman Forum, and Palatine Hill tour, we often dwell on the gladiators’ fight, death and victory. We always explain to the visitors that the gladiators were quite often saved, but it could happen (not rarely) that eventually one of the two combatants had to die.

When the fight ended with one of the two gladiators falling to the ground, care was always taken to make sure the defeated gladiator was really dead, to prevent the combatants from making secret pacts to spare each other. The referee would send an attendant into the arena to touch the gladiator’s body with a red-hot iron. If he was faking death, he would be unable to stand the touch of the burning iron and would move! If the gladiator was badly wounded or dying, he would be given the death blow to put an end to his suffering. To do this, a terrible executioner, his appearance inspiring fear and respect, was summoned into the arena. The entrance of this fearsome figure was accompanied by the shouts of the frightened crowd as they awaited the fatal blow. He was always present at the gladiatorial games equipped with a great hammer: the Charun.

A tremendous hammer blow to the head put an end to the gladiator’s life and suffering.

Charun or Charon was an Etruscan¹ demon from the underworld, who conducted the dead into the afterlife. The demon is depicted with a big, protruding hooked nose, sharp upper and lower teeth, long pointed ears, yellow eyes, a beard, and long hair. He seems to have worn the same tunic as the arbiter of the games but in reverse colors. 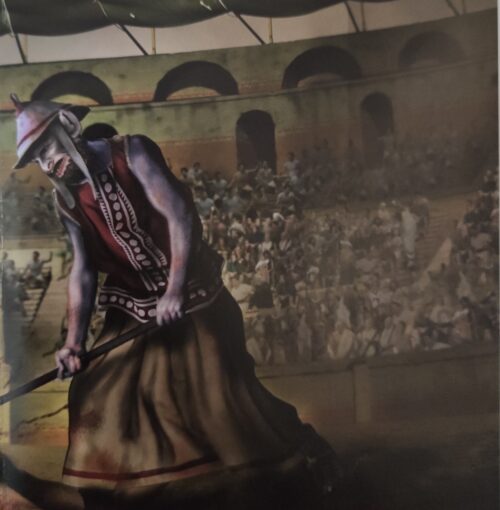 In Greek mythology and Roman mythology, Charon or Kharon is a psychopomp, the ferryman of Hades who carries souls of the newly deceased across the river Styx that divided the world of the living from the world of the dead. A coin to pay Charon for passage, usually, an obolus or danake, was sometimes placed in or on the mouth of a dead person. Some authors say that those who could not pay the fee, or those whose bodies were left unburied, had to wander the shores for one hundred years until they were allowed to cross the river. In the catabasis mytheme, heroes – such as Aeneas, Dionysus, Heracles, Hermes, Odysseus, Orpheus, Pirithous, Psyche, Theseus, and Sisyphus – journey to the underworld and return, still alive, conveyed by the boat of Charon.

Charon is featured in Dante’s Devine Comedy, and also in Virgil’s Eneid, both of these works provided inspiration for Michelangelo‘s interpretation of the Last Judgement.

The Last Judgment is an enormous fresco painted by the artist in the Sistine Chapel, in the Vatican Museums. On the big wall, down to the right he depicted a boat rowed by an aggressive Charon, who ferried souls to the Underworld in classical mythology, brings them to land beside the entrance to Hell; his threatening them with his oar is a direct borrowing from Dante. 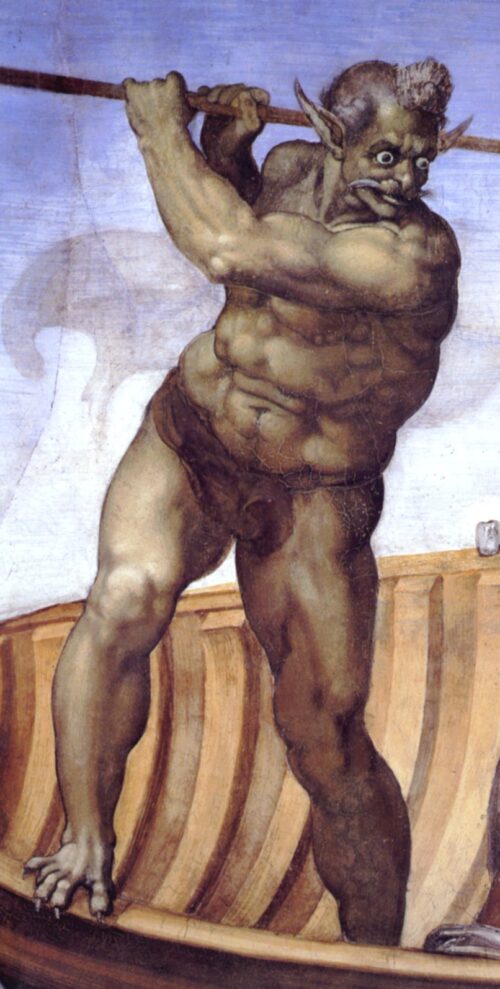 Michelangelo is not the only one inspired by Dante or Virgil. Charon is in fact part of our culture even after centuries. Imagine that he is one of the characters in the chapter “Odyssey” of the videogame Assassin’s Creed!

For more info about our Vatican and Colosseum tours click HERE