Did you know Rome had a sorcerer as pope? In a very difficult period, almost at the end of the first millennium, there was a pope in Rome who was known to be a sorcerer. Would you like to know more about this sorcerer who was elected pope? Come to Rome. We would be glad to take you on one of our wonderful TOURS. Come and learn more about Rome and its tales, including the incredible legend about the pope who was a sorcerer.

Who was this “sorcerer”?

His name was Gerbert of Aurillac. He was elected Pope at the end of the first millennium (999-1003). Those were “dark times”, and life was hard for many. This period was further marked by the widespread fear that the end of the millennium would also bring with it, the end of the world. Gerbert was a true scholar and a man of enormous erudition. He was such a learned man that he frightened many of the ignorant and superstitious population of the time. When he became pope under the name of Sylvester II, rumours immediately circulated that he had arrived at the papal throne through a pact with the devil, and that such knowledge could not be of this world.

What was his history?

He was born in Auvergne (nowadays France) shortly before the middle of the 10th century, he studied in France and Spain. During this time, he encountered numerous Islamic teachings becoming passionate about alchemy and magic, astronomy and arithmetic. He also had an astonishing career, but always continued to cause a stir and mistrust because of all his knowledge. 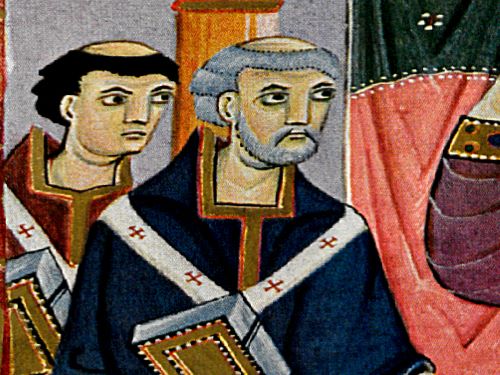 Sylvester II – The Pope known as the “sorcerer”

The legend of the Golem

One of the legends come from the writings of Raoul de Longschamp, a historian of the time. He related that Gerbert managed to subdue a demon and enclose it inside a golden head, a devilish Golem that answered his questions with a nod of its head. It only said yes or no.

Even after he had become officially Pope Sylvester II, he had never stopped questioning his Golem. And one day, the Pope decided to ask, “Will I die before singing mass in Jerusalem?”. The answer was a clear: no! He thought that it would be enough for him to avoid going on a pilgrimage to Jerusalem in order to live forever.

What the “sorcerer pope” had not considered, however, was the presence, beneath the Basilica of the Holy Cross (Basilica di Santa Croce in Gerusalemme), of a small quantity of earth that St. Helena had brought directly from the Holy Land along with other precious relics.

On 12 May 1003, after saying mass in this church, the pope was taken ill. The legend says he was quite astonished.

Then, suddenly, he understood.

Sylvester, remembered the Church had some earth coming from the Holy Land and from the city of Jerusalem. Startled, he looked around with a terror. After having realized what had happened, he died.

The legend of his burial

There are also many legends about his burial. In fact, it seems that his tomb also had some special diabolic powers. It is said that if a pope was about to die, water would pour out of Sylvester’s tomb, while the appearance of a little moisture, indicated the imminent death of a cardinal.

There are many other stories linked to Pope Sylvester II, the “sorcerer”. Come to Rome. We would be glad to take you on one of our wonderful TOURS. Come and learn more about Rome and its tales, including the incredible legend about the pope who was a sorcerer. Come and #feeltheessence.