The ancient Romans called the hill Albanus Mons. On the summit was the sanctuary of Jupiter Latiaris, in which the consuls celebrated the Feriae Latinae, and several generals celebrated victories here during times when they were not accorded regular triumphs in Rome. In Roman times, the area was often used by the rich as a way to escape the heat and crowds of Rome, as it is today as shown by the many villas and country houses present.

We already wrote about the two incredible vessels built for Emperor Caligula and placed in Lake Nemi to be his luxurious palace, today we will talk about another emperial palace built few years after Caligula by Emperor Domitian.

Domitian, who settled there on a permanent basis, decided to build a main complex in the most panoramic position towards both the sea and the lake, and featuring lavish new structures such as a racecourse and theatre. Probably the project was entrusted to Rabirius, architect of the Palace of Domitian on the Palatine Hill in Rome. 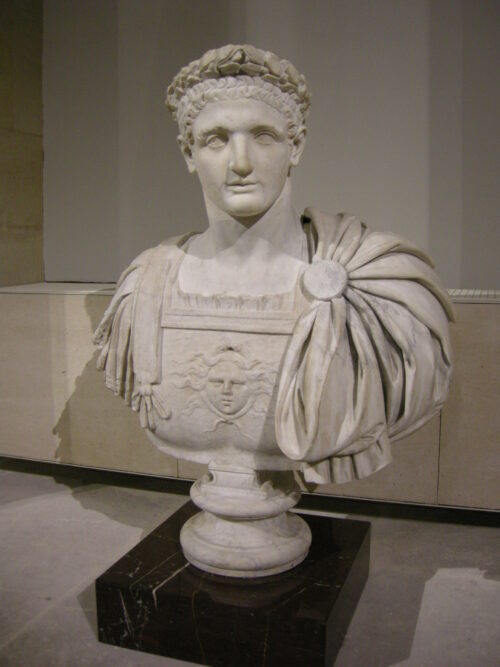 The villa came to occupy six square kilometres and given to the uneven ground, it was built on three terraces that from the rim of the ancient volcano descended to the shore of Lake Albano.

All around the structures of the imperial palace there were mesmerizing gardens, with fountains, nimpheums, statues, an hippodrome and a theatre. Moreover the complex of Domitian’s Villa was supplied from the southeast by four acqueducts and it was perfectly connected with Rome thanks to the Appian Way, still today considered the first “highway” of history and one of the best examples of Roman’s incredible engineering.

Martial mentions the villa as one of Domitian’s favoured resorts. Suetonius says Domitian had a passion for archery which he practised there and Pliny suggests he held boating parties on the lake.

On the death of Domitian the villa was rarely used by his imperial successors. Some modifications are dated to the second century and in particular to the eras of Trajan and Hadrian. Therefore, it is not unlikely that the emperor Hadrian stayed there waiting for the completion of his Hadrian’s Villa in Tivoli, while Marcus Aurelius lived there a few days using the villa as a refuge during the riots that took place in 175 AD.

Nowadays most of the remainings of this magnificent ancient palace are in the properties of the Apostolic Palace of Castel Gandolfo, property of the Vatican City and summer residence of the popes,  which is possible to visit.

The porperty is a 135 acre complex of buildings in a garden setting in the city of Castel Gandolfo, including the principal 17th century villa, an observatory and a farmhouse with 75 acres sof farmland. The main structure, the Papal Palace, has been a museum since October 2016.

On our website you can check our Vatican Tours and ask us to customize them in order to visit the extra-territorial sites of the Vatican city, such as Castel Gandolfo or the other Papal Basilicas in Rome: Saint Mary Major, Saint Paul outside the walls and Saint John in Lateran. Click HERE