In the 1-century a.D. Emperor Nero built his Golden Palace, in Latin Domus Aurea, which occupied 80 hectares of the ancient city. Where today the Colosseums stands, back at the time of Nero there was a big artificial lake decorating the gardens of the villa which run all around. 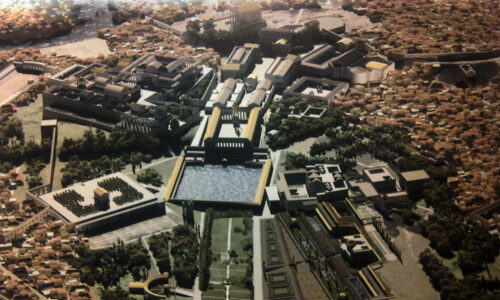 The palace was composed of 150 small and large rooms, for a total extension of 16,000 square meters, the equivalent of 3 football fields; about 30,000 square meters of walls decorated with frescoes and stuccos and vaults up to 12 feet high. The Golden House was completely covered with precious stones, shells, and pearls, while the ceilings of the dining rooms were characterized by movable ivory tablets. Petals and perfumes would have delighted the guests so appreciated by the emperor. This shows that the Golden House was not only intended as a place of residence for the emperor but also as a place for recreation and otium.

Placed at the entrance of the Domus Aurea, next to the Colosseum, there was a colossal gilded bronze statue. It was 35 feet high and supported by a 11 feet high pedestal. it seemed even more imposing. This grandiose statue, which represented the emperor in the guise of the sun god, was made by the Greek sculptor Zenodoro.

Inside, there are remains of rich pictorial decoration, attributed to Fabullus¹. Information about this roman artist came from the author Pliny the Elder. He provides us with curious anecdotes, including the fact that the artist always painted in toga, even on-site scaffolding. Here four adjectives to describe Fabullus, as we can read in this latin sentence: “fuit et nuper gravis et severus idemque floridus ac umidus pictor F.”.

The adjectives “gravis et severus” probably refer to his strong and determined personality, while “floridus and umidus” should refer to the typical technique of his painting. The term “floridus” refers to the fact that in the time of ancient Rome, the colors used in the art of the fresco were called “floridi”. They were very precious colors that were bought by the client. Of all these the most precious was the purple color because extracted from the shells. 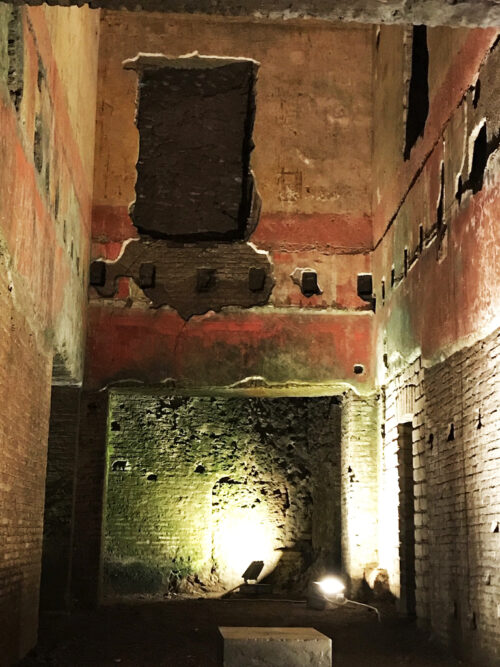 Built-in just 4 years by the architects Celere and Severus, the emperor’s residence included the area of the Palatine Hill, the slopes of the Esquiline, and part of the Caelian Hill, in total 250 hectares of land.

One of the most important rooms of the Golden House, was the Octagonal Hall, in the eastern part. The room was flanked by a series of courtyards that open on the sides and over the years it has aroused the interest of many researchers for the high technical and architectural value. It is characterized by the presence of a pavilion dome, to the top an oculus, and surrounded by a nymphaeum, preceded by a staircase on which the water flowed which refreshed the environment. 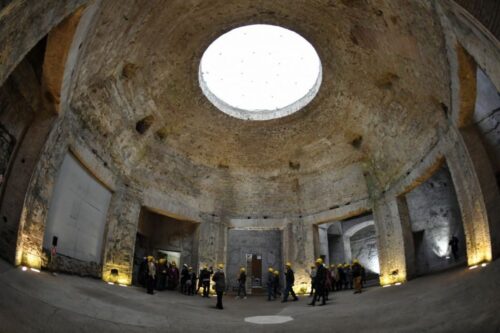 Nero became the symbol of cruelty and infamy for the city of Rome.

He suicided on the 9th of June 68AD and his successors destroyed and buried the palace, with all its incredible structures, frescoes, and pieces of art.

From the ‘500 the excavations of the Domus Aurea started but is just in the last years that a portion of the ancient palace is constantly excavated, restored, and open to the public during the weekends.

Now there’s also a new and innovative multimedia experience aimed to improve the scientific value of the site: high definition projections about the history of the Domus Aurea will be presented at the beginning of the itinerary, and high definition installation in augmented reality in the Golden Vault Room.


We suggest many Colosseum Tours on our website, including the Roman Forum and the Palatine Hill, and if you want to visit the ancient Domus Aurea of Emperor Nero we can customize your Colosseum Tour and include this gem in your Roman holidays.