Have you ever heard of the legend of Berenice’s ghost? Rome is not only a concentration of history, culture and tradition. The eternal city also contains a number of myths and legends that are still passed down, generation after generation. Did you know that in Rome, if you take a walk in the Ghetto, around the ruins of the Portico d’Ottavia, you might encounter a ghost? Ever heard of Berenice’s ghost? Come to Rome and take one of our tours. We’d like to take you through the Ghetto, and share its legends with you.

The legend of Berenice

Berenice was the beautiful daughter of Erode Agrippa, known as the Great and lived in Jerusalem. In the 1st century A.D., Berenice embarked on an intense love affair with the future emperor Titus. He had been sent to the Holy Land by his father, Vespasian, to put down some revolts. Titus almost destroyed Jerusalem and in 71 A.D. returned victorious to Rome (the Arch of Titus in the Roman Forum was built to celebrate this triumph), with Berenice by his side.

So far, nothing strange (even if the legend says that she was 21 years older than the future emperor). The problems started when Vespasian realised that Titus intended to marry her! By marrying her he would have introduced a stranger into the line of imperial succession. This was impossible and even more so, considering that she was a Jew! The arguments between Titus and his father continued for a long time and he never married. Eventually Vespasian died. But at that point, Titus, perhaps to honour his father’s memory, decided to send Berenice away from Rome (without marrying her!). 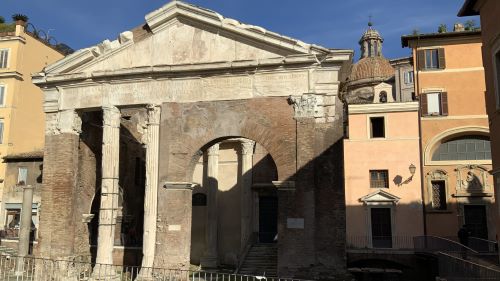 According to legend, Berenice’s ghost, sad and depressed, continues to wander around the Portico d’Ottavia. Her ghost lingers in this exact place since it is where in 71 A.D., the triumphal procession celebrating the military success of ‘his’ Titus started. It seems that Berenice’s ghost, can still be heard crying in the small alleys of the Ghetto. She keeps repeating “For the sake of power, that is now reduced to ruin, you have sacrificed me…!”

Come to Rome and take one of our tours. We’d like to take you through the Ghetto, and share its legends with you.