Where is this town?

The ghost town of Monterano is close to Bracciano, an hour drive from Rome and is especially child-friendly.

The beauty of this ancient settlement certainly lies in the fact that it presents historical evidence from different periods and is surrounded by a beautiful wilderness. From the Etruscan tombs one moves on to the medieval walls. From the medieval period, the visitors are then enchanted by the baronial palace. Many are also baffled by the beautiful Baroque church of San Bonaventura, perhaps designed by Bernini. Bronze Age ceramic fragments were also found in the area.

The village began to depopulate due to malaria in the 18th century. It was definitively abandoned in 1799. 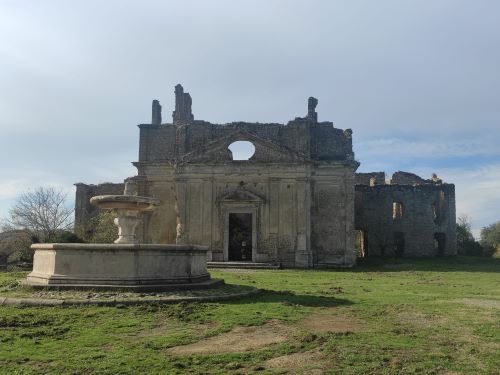 What can you see in the ghost town of Monterano?

The Fountain of the Lion is a beautiful work of art by Bernini, which adorns the façade of the baronial palace. Next to the Palace is the small Church of San Rocco and the Church of San Bonaventura which are worth a tour.

For older, more energetic children you may visit the “Diosilla waterfalls”, which you will find on your left before reaching the village. Continuing on the walk to reach the ghost city of Monterano, you will reach the “solfatara”. It is a thermo-mineralised water site at around 22 degrees, with strong gas emanations. The bubbling pools of water will certainly impress children but they will not stop complaining about the sulphur stench!!

Obviously, the beauty of this place has attracted many directors who have chosen it as the set for their films.