Legends are a part of the cultural heritage of every country. They usually stem from the oral tradition and mix what is real with what is only fantasy. Many legends have originated around the Pantheon in medieval times and most of them involve Satan… Read more about the Pantheon the medieval legends of  Satan and his works!

The Pantheon is an architectural marvel of the world. Almost two thousand years after it was built, the Pantheon’s dome is still the world’s largest unreinforced concrete dome. Its peculiarity is the “oculus” a grand central opening in the dome which allows light in the magnificent church. We love walking around this very well-preserved ancient roman building during our Essence of Rome Private Walking Tour and our Sunrise Private Tour.

At the beginning of the 7th century, Boniface IV converted the Pantheon into a Christian church, called Santa Maria dei Martiri. This conversion helped it survive the sacking of classical Roman buildings and has arrived to us, almost unscathed.

But this has not preserved it from the many legends involving Satan and his works!

According to popular belief, the opening at the top of the dome did not exist at first but is said to have been made by a large devil who, escaping from the roof, blew up the golden pinecone that closed the hole with his horns.  The golden artefact is said to have fallen onto the square behind the monument, which is therefore called Piazza della Pigna (the Italian for pinecone).

Diabolical is also the legend about the origin of the moat that runs around the Pantheon. It is said that this was not dug by man.  The legend involves the wizard called Baialardo. He would have obtained from Satan the Book of Command, the supreme and secret manual of evil arts in exchange for his soul. When Satan approached him to claim his soul as agreed, Baialardo tries to escape. He tricks the devil taking refuge inside the Pantheon, where he starts to pray asking to be saved. The devil, enraged at having been tricked, begins to turn furiously around the Pantheon, creating the moat with his hooves. 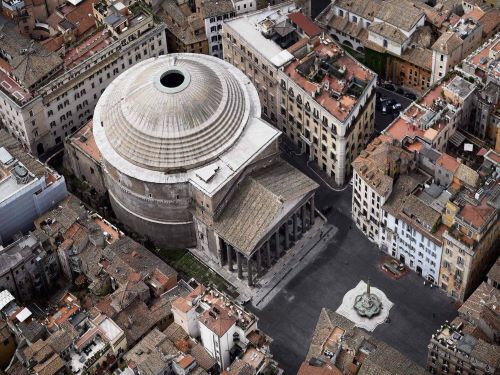 The Pantheon – The moat and the famous oculus.

We would love to show you the breathtaking oculus and the moat during our Essence of Rome Private Walking Tour and our Sunrise Private Tour. Who knows if there are any traces of Satan to still be seen?!