During Emperor Charles V‘s visit to Rome in 1536, Pope Paul III Farnese felt ashamed of the disastrous state of the Capitoline hill and decided to commission Michelangelo to design a new piazza.

Michelangelo re-designed the square orienting it towards St. Peter’s, which was at the time, the political centre of the city. He also worked on the construction of another palace (Palazzo Nuovo) and redesigned Palazzo dei Conservatori, harmonising both with the Palazzo Senatorio. In addition he imagined the wonderful pavement design that makes the piazza famous around the world.

Due to the slow pace of construction, Michelangelo died before seeing his work completed. Despite this fact, the construction was carried out faithfully following the master’s design. 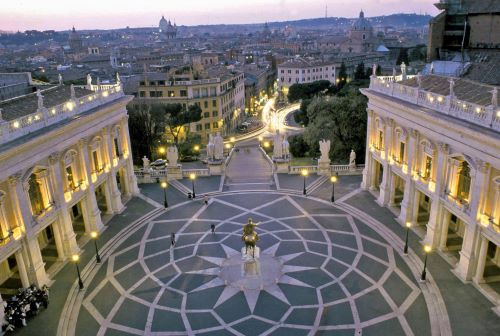 The real meaning of its design

Some scholars believe that Michelangelo did not just want to decorate the square. Thie site on which the Campidoglio is built, was the most sacred spot for the ancient Romans and probably had also been so, for the Etruscans when they ruled Rome. It was the end point of the triumphal path that ran through the Fori Imperiali. The site was called the Umbelicus Caput Mundi – the world’s midpoint- and the remains of this site were found a little further down, at the top of the Forum, and at the center of this ancient site, stood an oval stone called Omphalos.

Michelangelo wanted it to return to its former glory and once again be the “Umbelicus Caput Mundi“, but he could not put an oval stone in the centre of the square, like the one that had been there before. For this reason he created a design that reminded of the Omphalos. He did so by using diamond shapes to indicate the meridians and parallels. He also imagined a convex floor with a twelve-pointed star in the centre, indicating the constellations.

So the design is a tribute to the ancient Roman site and is definitely worth a visit. Come to Rome and select one of our TOURS. We’d be glad to take you to visit the spot that was called the Umbelicus Caput Mundi.… the “world’s midpoint”.