Mary Magdalene is a very important character from the Gospels who in recent years has been increasingly present in studies, research and even fiction. She played a very important role in the life of Christ and, in addition to this, it is said that she entered the Holy Grave first.

The Relic of the first foot to enter the Holy Grave

Few people know, that Rome holds, in the church of San Giovanni de’ Fiorentini at the beginning of Via Giulia, one of her most precious relics. Her foot. A beautiful reliquary holds the small foot-bone fragments completely covered in silver. Why is it considered one of the most important relics in Rome? Well… this is because, according to tradition, it was the first human foot to have entered the Holy Grave of the Risen Christ. A symbol, of great importance. Specially at Easter. 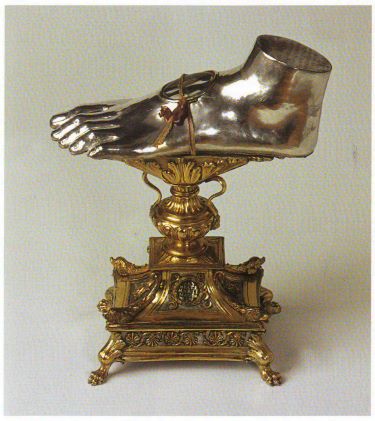 The History of the Relic

Mary Magdalene’s burial took place in Ephesus and her tomb was object of great veneration by pilgrims. The remains of the tomb were transferred to Constantinople in the ninth century. Years later the king of Jerusalem decided to donate the body of Mary Magdalene to the King of France. On his return to his homeland, he passed through Rome and paid homage to the Pope by placing part of the relic, the left foot, in a chapel located at the entrance to Ponte Sant’Angelo. After many vicissitudes, the relic finally landed in the Basilica where it is kept today.

Rome guards this very special Easter relic, the remains of the first foot to enter the Holy Grave. Come to Rome and take one of our tours; we’d be glad to share this and many other curiosities of the Eternal City. Come and #feeltheessence.