Rome’s secrets; the legends of  Via della Gatta. Rome is full of secrets ad curiosities. A very special one is the legend of Via della Gatta. According to this legend, the statue of the cat at the corner of Palazzo Grazioli, would indicate a treasure with his gaze. Come and take a stroll around Rome with us. We’d be glad to share other stories with you. Select your tour here.

On the cornice of Palazzo Grazioli, in Via della Gatta, right in the center of Rome, there is a very special statue that has inspired various legends. Placed in a back corner of the building, the cat gives its name to a side street of Via del Plebiscito, which later became Piazza Grazioli. The beautiful building (Palazzo Grazioli) was built by Giacomo della Porta in ‘500 for the family Ercolani, and then become in the mid-800 the noble residence of the commander Vincenzo Grazioli.

Architect Antonio Sarti found a marble cat during the restoration of 1874. He decided to place this artifact on the cornice of the building. The reasons for this decisions are not clear.  The Romans tried to provide an explanation with at least three different legends. 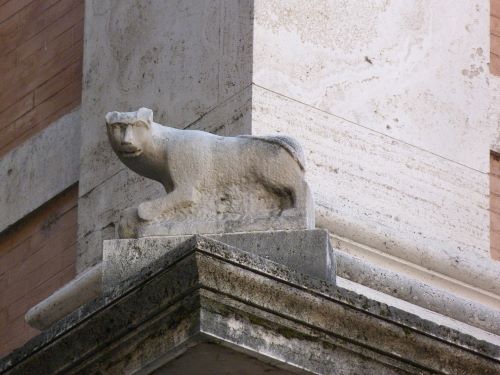 Marble cat in Via della Gatta

The best-known story would have it that a cat had saved the life of a child in danger balanced on a window. The legend says the cat warned the distracted mother with his meows. The statue would thus have been made and then placed right at the point from which the child was in danger of falling.

A second legend says that a night fire broke out in the area and a cat alerted the inhabitants saving many lives.

Many people have been fascinated by a third legend. This tells of a treasure and the cat was placed on the cornice to indicate its location. Unfortunately, no treasure was ever found where the cat points its gaze!

Come and take a stroll around Rome with us. We’d be glad to share other stories with you. Select your tour here.