San Francesco lived and prayed here at San Francesco a Ripa Grande during his Roman visits to Pope Innocent III. At the time, the church was known as the “Hospice of San Biagio” and was run by the Benedictines of Ripa Grande. After Francesco’s death, the cell where he stayed during that first visit, became a place of prayer and devotion. During the 17th century there was a plan to destroy this in order to renovate the Church. The Franciscan friars, as can be easily imagined, strenuously opposed this decision. The legend says that San Francesco himself appeared in a dream to Card. Alessandro Montalto Peretti, intervened to prevent the demolition of the sacred cell. In any case, the cell was spared and was renovated in 1698. 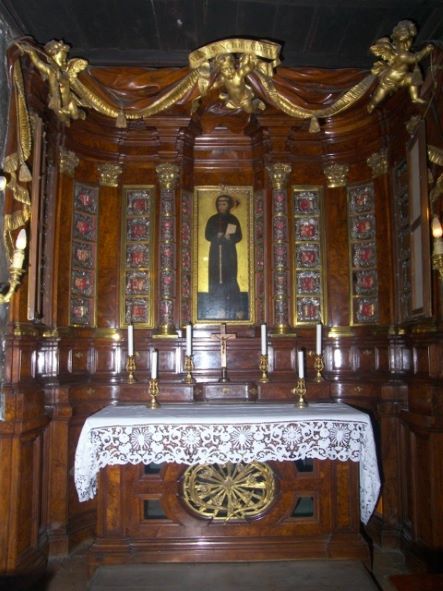 San Francesco a Ripa and the ingenious mobile altar.

The relics of San Francesco and the altar

The main relics of San Francesco d’Assisi in the Church of San Francesco a Ripa Grande are three: a piece of the bloody bandage, a piece of the cilice and the rock on which the Saint rested his head. San Francesco stayed in the cell of the hospice of San Biagio at least six times. These were all occasions during which he went to meet the Pope to discuss the approval of the Franciscan rule.

San Francesco a Ripa and the ingenious mobile altar

Standing out in such a humble and simple place is the walnut-root wooden altar, the work of the Franciscan cabinetmaker Fra Bernardino da Jesi (17th century). This special place hides an ingenious trick which is worth a visit.  An ingenious mechanism acts as a movable reliquary. Panels move and the side doors open of the altarpiece and displays silver caskets containing the relics of the greatest Franciscan saints, reliquaries donated by the Grand Duke of Tuscany Leopold dei Medici.