The National Museum of Rome is an incredible collection of antiquities divided in four locations around the city: Altemps Palace, Crypta Balbi, Baths of Diocletian and Massimo Palace. All the pieces displayed in these sites are the results of the massive excavations started in Rome when it became the capital of the Italian kingdom in 1871.

At that time Rome was still a pretty small city, it had been ruled by the popes for centuries and it was still tied to a rural life. The Tiber river often flooded the city center, covering the streets with layers of mud and causing plagues and deseases, and the streets were mainly narrow alleys where barely a charriot could pass through.

It was clear to everyone that Rome needed to became a safe and organized city in order to be the capital of Italy and that’s why it started a hudge campaign of demolitions and excavations to re-organize the city and build the river banks.

That’s when many incredible masterpieces, which remained covered for centuries, return to light and started to be part of the National Museums of Rome.

Today we would like to talk about one of the most incredible discoveries that happened in 1885 on the Quirinale hill, in the spot where centuries ago there were the Bath of Emperor Constatine: the Boxer at rest. 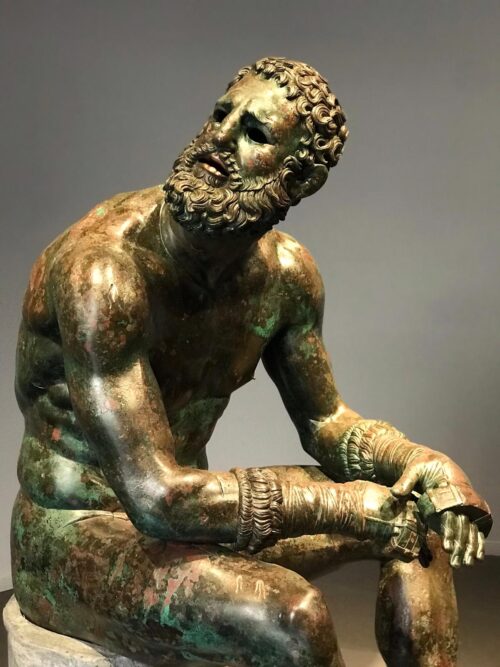 First of all this is a bronze statue, something pretty rare nowadays as most of the ancient bronze it was melted down through the centuries for several purposes. In addition it is an original greek statue, dating back to the II – I century BC, probably a copy of a statue attributed to the famous artist Lisippo, personal sculptor of Alexander the Great.

The details you can admire looking at this statue from closer are incredible, the perfection of his body, the boxing gloves, called Caestus,the expressive intesity of his face, which is covered in scars, recent cuts and bruises, the drops of blood visible on his right arm and corresponding leg, and the rotation of his head as looking at someone calling him.

Imagine to discover this masterpiece, excavating and uncovering little by little this body looking at you after centuries of darkness, it must have been an incredible moment.

This is how, Rodolfo Lanciani¹, described this moment in 1885:

I have witnessed, in my long career in the active field of archaeology, many discoveries; I have experienced surprise after surprise; I have sometimes and most unexpectedly met with real masterpieces; but I have never felt such an extraordinary impression as the one created by the sight of this magnificent specimen of a semi-barbaric athlete, coming slowly out of the ground, as if awakening from a long repose after his gallant fights. 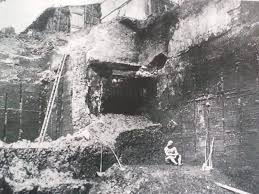 The National Museum of Rome is an incredible collection that you can’t miss once in Rome. Check our website and ask us to customize your tour to make sure you will experience glimpses of Rome beyond the obvious.

To costumize your tour and visit Palazzo Massimo click HERE