There is an eerie legend related to the portraits in Saint Paul Oustide Walls (San Paolo Fuori le Mura). The portraits represent the 266 popes from St. Peter to Pope Francis. Do you want to know more about this legend? Come to Rome and take one our Tours. We’ll be glad to show you the 4 major papal basilicas, including Saint Paul Outside Walls… and while we do so, we’ll share its legends and many other stories that are typical of Rome!

The basilica was founded by the Roman Emperor Constantine I over the burial place of Paul of Tarsus, where it was said that, after the apostle’s execution, his followers erected a memorial, called a cella memoriae.  Since this location was on the via Ostiense, outside the walls of Rome, the Church was called Saint Paul Outside Walls (“fuori le mura”).

It is one of Rome’s four major papal basilicas,  along with the basilicas of Saint John in the Lateran, Saint Peter’s, and Saint Mary Major.  In addition to this, the church is amongst the 15 largest churches if the world. It is definitely worth a tour!

The Inside of the Basilica

The nave’s 80 columns and its wood and stucco-decorated ceiling are from the 19th century. All that remains of the ancient basilica are the interior portion of the apse with the triumphal arch. But there is one thing that attracts pilgrims and tourists alike. This is the eerie legend of the portraits of Saint Paul Outside Walls.

The eerie legend of the portraits of Saint Paul Outside Walls

This huge church has one of the most unique things in the whole city. The portraits of the Popes. These portraits, located high up on the side walls of the entire church, represents all the Popes in history. They start with Saint Peter and end with Pope Francis. There are 266 portraits on the walls. These portraits are not small, and this gives you the idea of how big St Paul’s Basilica is. 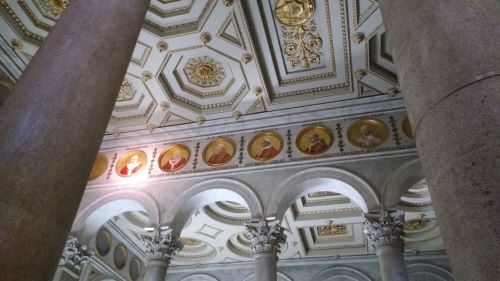 Portraits of the Popes in Saint Paul Outside Walls 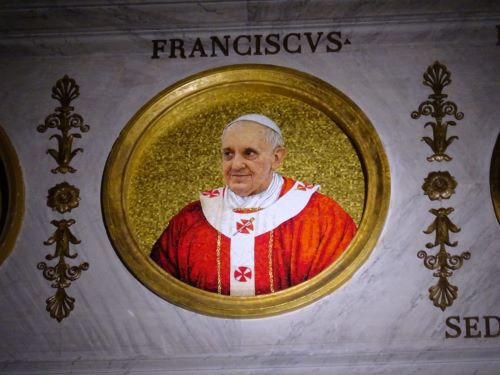 Portrait of Pope Francis in Saint Paul Outside Walls

There are empty spaces on the wall for future portraits, but they are running out…..The legend says that once the spaces for the portraits of the popes inside Saint Paul’s Basilica are finished, the Church will cease to exist, and as a consequence, the world is doomed to end.

At the moment.. there are 26 spaces left. It seems we still have a little time before the end of the world!!