The first comic strip (and bad word) are in a church?

It is found in the church of San Clemente, a basilica with three superimposed levels embellished with numerous mosaics. Among these marvels, in a special spot, you can find a sort of “comic strip” which contains the inscription in which we find read the first swear word in the history of the Italian language. It reads: “fili de pute” (which we will leave to you to translate!). In the fresco painting,  the phrase is pronounced by the Prefect of Rome, Sissinio. The phrase is addressed to his soldiers.

What is the comic strip about and why is there a bad word?

Thanks to the charisma of Pope Clement (to whom the church is dedicated), Theodora, the wife of the prefect of Rome, Sisinius, decided to become a Christian. This was considered a disgrace. At that time, in fact, Christians were outlawed and persecuted. The woman (Theodora)had told him nothing, but Sisinnius was suspicious. So, one day, the prefect decided to follow her. The plan was to catch her in the act and find the proof she had become a Christian. He asked two soldiers, Gosmarios and Albertello, accompany him in this “investigation”. When Sisinnius saw that his wife had gone to attend a mass celebrated by Clement, he ordered his soldiers to arrest them both. But the legend says that God blinded Sisinnius and the soldiers, so that the latter, believing they had bound Theodora and Clement, were actually dragging two heavy columns. 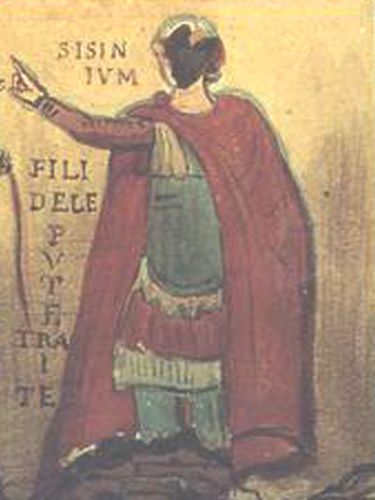 The painting depicts precisely this last scene where Sissinius orders the soldiers to drag the two heavy columns, thinking they had captured Clement and Theodora. The inscriptions are found next to the characters pronouncing them. We can say this is the first “comic strip” in history. Most certainly… it is the first evidence of the use of “vernacular writing” for artistic purposes!!

Come and see the first comic strip in history

Do you want to see the first comic strip in history (containing a bad word)? Come to Rome… ask us specifically, and we’ll take you to the church of San Clemente. It is only a few steps away from the Colosseum. We will take you to the Colosseum with one of our amazing TOURS and then, if you are interested, we’ll walk over to San Clemente and share this curiosity with you. Come and see the first comic strip (with a bad word) in history. Come to Rome and #feeltheessence.