The Fountain of Books: history and curiosities

The Fountain of Books and its location

The Fountain of Books is located in the Rione Sant’Eustachio – close to the Pantheon- precisely in Via dei Staderari. At the time this street was called Via dell’università (of the University) since it was close one of the seats of the University of Rome “La Sapienza”, while Via dei Staderari was the parallel street. Later this street was suppressed with the enlargement of Palazzo Madama, and later re-established in its present location. The name of the street refers to the makers of scales and “stadere” that abounded in that area.

The Fountain of Books, the looks of this little gem

The travertine fountain is set in a niche, surmounted by a round arch decorated with the sculpted inscription S.P.Q.R.. Under the arch is the symbol of the Sant’Eustachio district – the stag’s head – surrounded by four books, two on each side – a reference to the Sapienza University. From the spouts in the shape of bookmarks, gushes water that collects in the basin below. 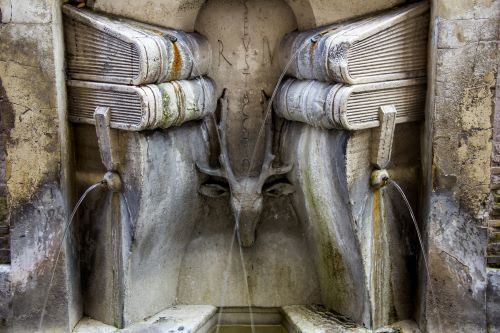 Fountain of books – A small gem in Rome

Looking carefully at the Fountain of Books, one of Rome’s many gems, one realises that above the stag’s head, right in the middle of the antlers, there is an inscription: ‘S. Eustacchio, R. IV’. A curious mistake on the stonemason’s part: in fact, Sant’Eustachio is Rome’s Rione VIII, not IV.

Rome is full of grand and famous monuments, but it also hides little gems. We’d be glad to show these to you while walking around Rome. Come and select one of our TOURS. Come and see these little gems for yourself!