Everybody who visits Rome must see the Colosseum, this is taken for granted.

People usually take a tour of the Colosseum, Roman Forum, and the Palatine Hill, so the entire archeological area, one of the most important in the world. Most of them come from the city center, but many arrive from the other side of the city and pass by some ancient ruins. They walk hurriedly without paying attention to them, but those ruins are exactly the place where the gladiators used to live and be trained! It’s the famous Ludus Magnus.

The gladiators were trained in barracks by a special coach or by an experienced gladiator. Barracks of this kind were found all over the empire. In Rome, there were five. 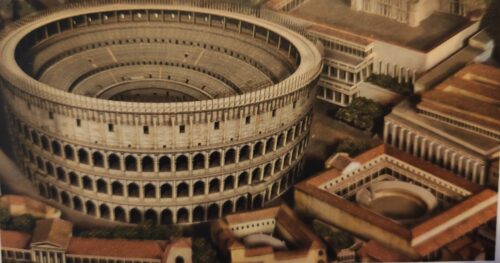 The reconstruction above shows the area around the Colosseum. In the bottom right-hand corner you can see two of the barracks: the Ludus Magnus built by the emperor Domitian, connected directly to the undergrounds of the amphitheater by an underpass; the Ludus Matutinus, smaller, where the gladiators were trained for the venationes (combats with wild animals, held at the start of the entertainments.

On buying or capturing some recruits, the lanista would assign them to the various coaches. After holding trials in the barracks, the coaches had a good idea of the potential of each recruit and they would be assigned to one or other of the two main classes: the heavily or lightly armed gladiators. These two groups were further divided into several different specialties. Then followed the specialized training that would take the recruits to fight in the arena wearing the special kind of armor that went with his particular skill. At the end of it, the recruit had the right to call himself a gladiator. To perfect his skills, each recruit was fed a diet to build up his muscles and improve their tone. His reflexes were sharpened by exercise and the heavy training of the legionaries¹ made him stronger. 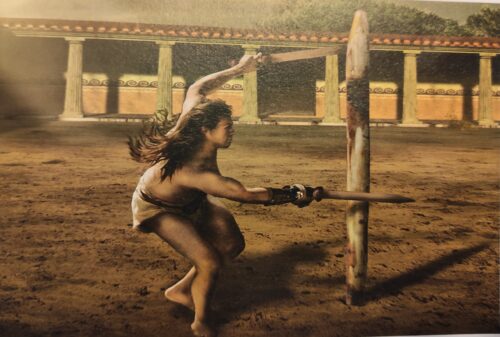 With their bodies shaped by the right kind of diet and their muscles hardened by exercise, the recruits went on to the last stages of their training. The first was the exercise at the post, which meant practicing fighting against a large post set in the ground. Armed with a heavy wooden shield and sword the recruit was trained to fight with the post as if it was an enemy soldier. Exercising against real opponents, so that the recruit learned how to land hits on the enemy without leaving areas of his body open to blows.

For more info about our Colosseum Tours click HERE