In the 4th century, during the pontificate of Pope Liberius (352-366), a rich and noble Roman patrician named John and his noble wife decided to make an offer to the Blessed Virgin Mary. They resolved to build a church dedicated to her in Rome. The legend says the Virgin Mary appreciated their wish and appeared to the couple in a dream. On the night between the 4th and 5th August she appeared in their dreams telling them she would indicate with a miracle where the church should be built. The same night the Virgin Mary appeared also to the Pope telling him about the Roman couple. She told him also of her decision to indicate with a miracle, the location for the church.

The following morning, the Roman couple went to the Pope to tell him about their dream. Since the Pope had already been warned by the Virgin Mary, he told the couple he agreed with their plan and was ready to select the site. They awaited the sign from the Virgin Mary. 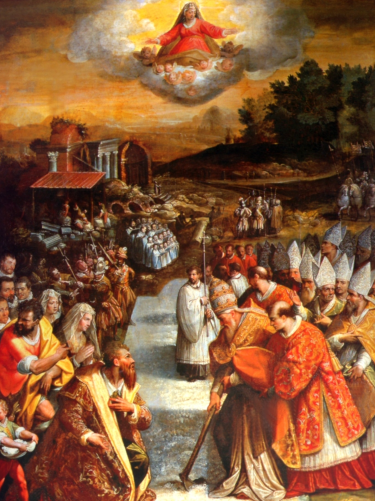 The miracle of the snowfall – The Legend of Santa Maria Maggiore

On the night between the 4th and 5th of August there was a miraculous snowfall that covered the Esquiline Hill in the middle of summer. This was the sign from the Virgin Mary. The pope marked out the perimeter of snowfall and therefore, determined the perimeter of the church itself. He blessed the grounds and initiated the works for the new church at the expense of the noble couple. This was the beginning of the construction of the current magnificent Basilica of Santa Maria Maggiore.

There are no written reports of this but in any case, on 5th August each year, the so-called ‘miracle of the snowfall’ is re-enacted. This is commemorated during the celebration of Mass in the morning and in the Vespers in the evening. The celebration included a cascade of white petals thrown from the centre of the coffered ceiling….  A true wonder.

Select your tour on ESSENCE OF ROME and ask to see the Basilica. We’d be glad to show you. Come and #feeltheessence!