The octagon hall is one of the marvels of the domus aurea. The hall had a rotating ceiling which moved continuously like the sky. The octagonal hall employed slaves to rotate the ceiling. The octagonal hall, a masterpiece of Roman architecture, overlooked a so called xystus, which was nothing more than a track for watching gymnastic competitions, and an immense park.  The dome was completely built of concrete and set on an octagonal base. The first part of the dome follows a pattern of octagonal segments (like Brunelleschi’s dome in S.Maria del Fiore in Florence). The second part, instead, takes on a circular shape. The central part surmounted by the dome, functions as a Roman triclinic, where the emperor manifested himself as divine, through light effects that filtered through the dome. 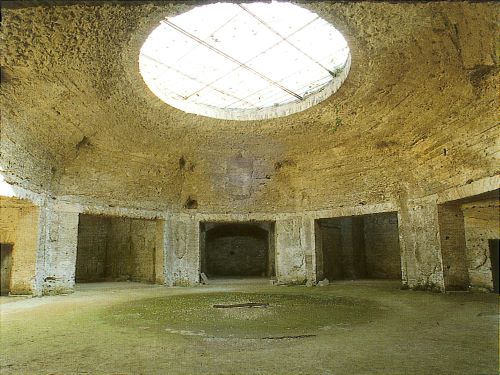 There are also lateral spaces that served and as elements of buttressing for the dome. This was probably one of the models from which the famous dome of the Pantheon drew inspiration. It is, in fact, an early example of the use of cement. It is a technique, developed by the Romans, for the development of large and articulated interior spaces.

On either side of the octagonal hall were also two apartments. These are characterized by paintings and identify them as the “hall of Achilles at Skyros” and the “hall of Hector and Andromache.”

An exciting underground journey to discover one of the greatest architectural works ever conceived. Come and take one of our TOURS and we would be glad to reveal what Rome has jealously hidden and guarded for centuries.