Where is Marcus Aurelius’ statue?

The statue is an ancient Roman equestrian statue currently placed on the Campidoglio (Capitoline Hill). It is made of bronze and is over 4 m tall. The statue is only a few steps away from the Colosseum, Piazza Venezia and the Ghetto. An amazing location, just above the Roman Forum.

But why is there an owl on Marcus Aurelius’ statue?

There is a legend behind the presence of a so-called owl which sits on the horse’s head. The legend says that the owl will spring to life and sing to herald the end of the world. This will happen on the day when the entire equestrian statue of Marcus Aurelius “discovers in gold”; when the statue will once again, be entirely covered in gold. The statue of Marcus Aurelius is, in fact, made of gilded bronze. Only  some traces of gilding still remain here and there on the statue. 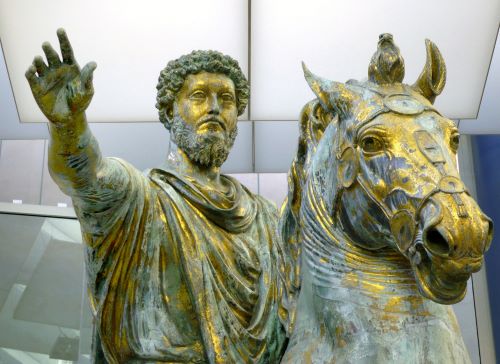 The owl of Marcus Aurelius

The owl is right there between the horse’s ears, although….it is not actually an owl!!!! It is only the tuft of the horse’s mane! But it does really look as a small bird and the Romans have always called it so…

The superstition of the owl on Marcus Aurelius’ statue

At the time the copy of the equestrian statue was made for display in the Piazza del Campidoglio, people feared that the copy of the Marcus Aurelius might be made in gold. This would have made the prophecy come true!! But the gilding was never realized. Hence the gilded copy – that would have caused the end of the world- was never made and the owl is still there….

Come to Rome and have a look at the equestrian statue of Marcus Aurelius. See for your self if there is an owl as the legends says. We’d be glad to take you for a TOUR. Come to Rome… come and #feeltheessence.