Today we talk about one of the most important archeological areas in the entire world, a site that everyone wants to visit during his holidays in Rome and that’s normally included in all the guided tours regarding the area of the Colosseum: The Roman Forum.

The Roman Forum, one of the most famous sites in Rome, was the heart of Ancient Rome. If we make a comparison with modern times, it was what Times Square is for New York and what Trafalgar Square is for London.

Times were different though, a lot different. On the Roman Forum, which was a large public space in the center of Ancient Rome, there were triumphal processions, public speeches, trials, executions, gladiator fights, and most importantly, a lot of commercial activity. One of the most famous speeches ever delivered was given in the Roman Forum by Mark Anthony’s “funeral oration of Caesar” which was later immortalized by Shakespeare.

The Roman Forum was oriented northwest to southeast and extended in a small valley between the Palatine Hill, which had the Circus Maximus at its foot, and the Capitoline Hill, another of the 7 hills in the center of Rome on which the city was built on. Originally, the site of the Forum had been a marshy lake where waters from the surrounding hills drained. This was drained by the Tarquins with the Cloaca Maxima, one of the world’s earliest sewage system. 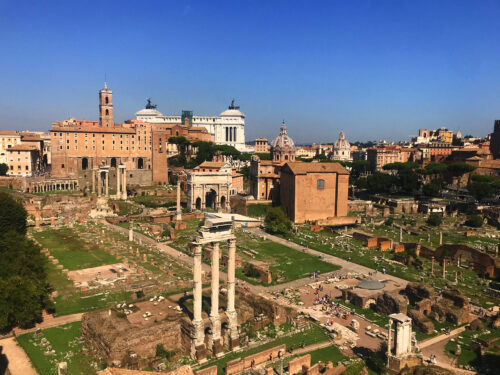 The two basilicas, the Basilica Julia and the Basilica Aemilia defined the long sides of the Roman Forum, and it extended as far as the Arch of Titus, a famous arch built to commemorate the sacking of Jerusalem under the command of Titus and which provided funding to build the Colosseum.

Apart from being an open square for public services and a marketplace, the Roman Forum also had its most important buildings of Ancient Rome built alongside it.

This includes government buildings, temples, statues, shrines, etc. The oldest buildings in Rome were built here, including the Regia (8th century B.C.), and the Temple of Vesta (7th century B.C.), as well as the Palace of the Vestal Virgins for Ancient Rome’s priestesses.

Even though the political and economic activity gradually moved to other locations in Ancient Rome, the Forum remained one of the most important locations in the city.

The finalization of Trajan’s Forum, commissioned by Emperor Trajan, though marked a shift inactivity. This happened in the year 110 A.D. Regardless, the Forum was still being expanded over the coming centuries.

One of the final Roman additions was the Basilica of Maxentius, which was constructed under the reign of Constantine the Great in the year 310 A.D. and still today is one of the best preserved structures that you can admire during your visit to the Roman Forum.

After the fall of the Western Roman Empire¹ in the year 476 A.D., the population of Rome drastically reduced. It’s estimated that only 1/3 of the estimated 750,000 Romans still lived in the Eternal City.

Even though some structures were still being built, and many of the existing buildings were transformed into Catholic churches, similar to for example the Pantheon and the Castel Sant’Angelo, most of the buildings started falling apart over the coming centuries.

By the 8th century, most of the temples and monuments in the Roman Forum were falling apart, and many of them were dismantled in order to build castles and other structures in the area.

Because of the neglected state of the area, the Forum was used to let livestock graze. Because of this, the most important square of Ancient Rome was being referred to as the “Campo Vaccino”, or “cow field.“

The Roman Forum suffered some of its worst depredations during the Italian Renaissance, particularly in the decade between 1540 and 1550, when Pope Paul III, exploited it intensively for material to build the new Saint Peter’s Basilica. Just a few years before, in 1536, the Holy Roman Emperor Charles V held a triumph in Rome on his return from conquering Tunis in North Africa. To prepare the Forum for the procession intended to imitate the pageantry of the ancient Roman triumph, the papal authorities undertook sweeping demolitions of the many medieval structures on the site, to reveal and better display the ancient monuments. This required the clearance of some 200 houses and several churches, the excavation of a new “Via Sacra” to pass under the arches of Titus and Septimius Severus, and the excavation of the more prominent monuments to reveal their foundations.

It wasn’t until the early 19th century that the first archaeologists showed interest in the site of the Roman Forum. 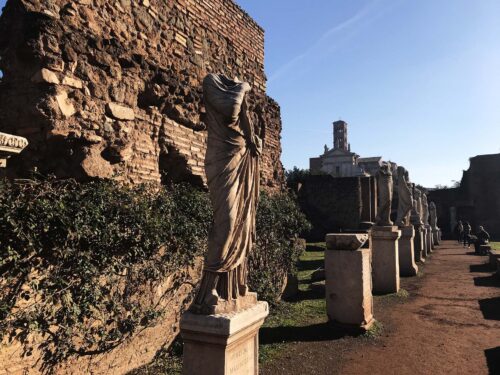 The excavation by Carlo Fea, who began clearing the debris from the Arch of Septimius Severus 1803 marked the beginning of clearing the Forum. Excavations were officially begun in 1898 by the Italian government. The 1898 restoration had three main objectives: restore fragmented pieces of columns, bases, and cornices to their original locations in the Forum, reach the lowest possible level of the Forum without damaging existing structures, and to identify already half-excavated structures, along with the Senate-House and Basilica Aemilia. These state-funded excavations were led by Dr. Giacomo Boni until he died in 1925, stopping briefly during World War I.

Excavations in the forum continue, with new discoveries by archeologists working in the forum since 2009 leading to questions about Rome’s exact age. One of these recent discoveries includes a tufa wall near the Lapis Niger used to channel water from nearby aquifers. Around the wall, pottery remains and food scraps allowed archeologists to date the likely construction of the wall to the 8th or 9th century BC, over a century before the traditional date of Rome’s founding

The long history of this archeological area, its incredible monuments still visible today, and its proximity to the Colosseum, makes The Roman Forum one of the most visited areas in the world, visited by nearly 5 million tourists every single year! Do you want to be one of them?!? Come and join one of our Colosseum and surrounding archeological area tours.