Today we would like to tell you the story of the worst sack of the history of Rome, the one that took place on the 6 of May 1527, when the troops of the Emperor Charles V entered in Rome through the Vatican Walls and tried to carry out an attack to the life of Pope Clement VII who was inside the Basilica of Saint Peter.

The growing power of Holy Roman Emperor Charles V alarmed Pope Clement VII, who perceived Charles as attempting to dominate the Catholic Church and Italy. In an effort to resist the influence of the Habsburg dynasty, Clement VII formed an alliance with Charles V’s arch-enemy, King Francis I of France, which came to be known as the League of Cognac.

The army of the Holy Roman Emperor defeated the French army in Italy, but funds were not available to pay the soldiers. The 34,000 Imperial troops mutinied and forced their commander, to lead them towards Rome. Apart from some 6,000 Spaniards under the Duke, the army included some 14,000 Landsknechte under Georg von Frundsberg, some Italian infantry, and also some cavalry under the command of Ferdinando Gonzaga. Though Martin Luther himself was not in favor of attacking Rome or the Pope, some who considered themselves followers of Luther’s Protestant movement viewed the papal capital as a target for religious reasons, and shared with the soldiers a desire for the sack and pillage of a city that appeared to be an easy target. Numerous bandits, along with the League’s deserters, joined the army during its march.

The Duke left Arezzo on 20 April 1527, taking advantage of the chaos among the Venetians and their allies after a revolt broke out in Florence against Pope Clement VII’s family, the Medici. In this way, the largely undisciplined troops sacked Acquapendente and San Lorenzo alle Grotte, and occupied Viterbo and Ronciglione, reaching the walls of Rome on 5 May. 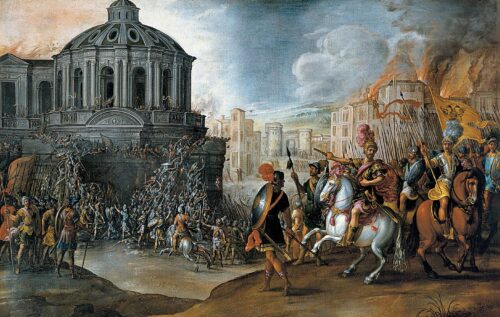 The imperial troops were 14,000 Germans, 6,000 Spanish, and an uncertain number of Italian infantry. The troops defending Rome were not at all numerous, consisting of 5,000 militiamen led by Renzo da Ceri and 189 papal Swiss Guard. The city’s fortifications included the massive walls, and it possessed a good artillery force, which the imperial army lacked.

On 6 May, the imperial army attacked the walls at the Vatican Hills. Duke Charles was fatally wounded in the assault, allegedly shot by Benvenuto Cellini. The Duke was wearing his famous white cloak to mark him out to his troops, but it also had the unintended consequence of pointing him out as the leader to his enemies. The death of the last respected commander of authority among the Imperial army caused any restraint in the soldiers to disappear, and they easily captured the walls of Rome the same day.

In the event known as the Stand of the Swiss Guard, the Swiss, alongside the garrison’s remnant, made their last stand in the Teutonic Cemetery within the Vatican. Their captain, Kaspar Röist, was wounded and later sought refuge in his house, where he was killed by Spanish soldiers in front of his wife. The Swiss fought bitterly, but were hopelessly outnumbered and almost annihilated. Some survivors, accompanied by a band of refugees, fell back to the Basilica of Saint Peter steps. Those who went toward the Basilica were massacred, and only 42 survived. This group of 42, under the command of Hercules Goldli, managed to stave off the Habsburg troops pursuing the Pope’s entourage as it made its way across the Passetto di Borgo, which was a secret corridor that still connects the Vatican City to Castel Sant’Angelo. 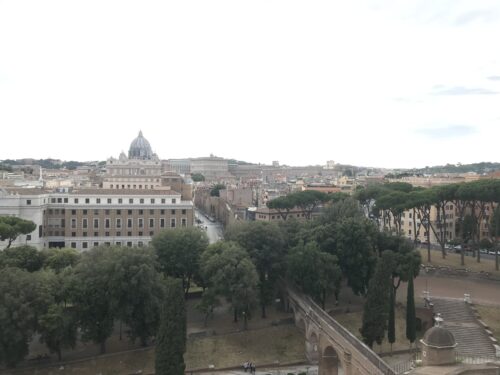 After the execution of some 1,000 defenders of the papal capital and shrines, the pillage began. Churches and monasteries, as well as the palaces of prelates and cardinals, were looted and destroyed. Even pro-imperial cardinals had to pay to save their properties from the rampaging soldiers. On 8 May, Cardinal Pompeo Colonna, a personal enemy of Clement VII, entered the city. He was followed by peasants from his fiefs, who had come to avenge the sacks they had suffered at the hands of the papal armies. Colonna was touched by the pitiful conditions in the city and gave refuge to some Roman citizens in his palace.

In the meantime, Pope Clement VII remained a prisoner in Castel Sant’Angelo. On 6 June, Clement VII surrendered, and agreed to pay a ransom of 400,000 ducati in exchange for his life; conditions included the cession of Parma, Piacenza, Civitavecchia and Modena to the Holy Roman Empire (however, only the last would change hands). At the same time Venice took advantage of this situation to capture Cervia and Ravenna.

Often cited as the end of the Italian High Renaissance, the Sack of Rome impacted the histories of Europe, Italy, and Catholicism.

Before the Sack, Pope Clement VII opposed the ambitions of Emperor Charles V and the Spanish, whom he believed wished to dominate Italy and the Church. Afterward, he no longer had the ability to do so, lacking the military and financial resources.To avert more warfare, Clement adopted a conciliatory policy toward Charles. Charles then began exerting more control over the Church and Italy.

The Sack had major repercussions for Italian society and culture, and in particular, for Rome. Clement‘s War of the League of Cognac would be the last fight for Italian independence and unity until the nineteenth century. Rome, which had been a center of Italian High Renaissance culture and patronage before the Sack, suffered depopulation and economic collapse, causing artists and thinkers to scatter. The city’s population dropped from over 55,000 before the attack to 10,000 afterward. An estimated 6,000 to 12,000 people were murdered. Many Imperial soldiers also died in the aftermath, largely from diseases caused by masses of unburied corpses in the streets. Pillaging finally ended in February 1528, eight months after the initial attack, when the city’s food supply ran out, there was no one left to ransom, and plague appeared. The city did not recover its population losses until approximately 1560.

The Sack also contributed to making permanent the split between Catholics and Protestants. Before the Sack, Charles and Clement disagreed over how to address Martin Luther and the Protestant Reformation¹, which was spreading throughout Germany. Charles advocated for calling a Church Council to settle the matter. Clement opposed this, believing that monarchs shouldn’t dictate Church doctrine, and also fearing that he might be deposed or killed. Clement advocated for fighting a Holy War to unite Christendom. Charles opposed this because his armies and treasury were occupied in fighting other wars. After the Sack, Clement relented to Charles’ wishes, agreeing to call a Church Council and naming the city of Trent as its site. He did not convene the Council of Trent during his lifetime, fearing that the event would be a dangerous powerplay, and perhaps even death-trap. In 1545, eleven years after Clement’s death, his successor Pope Paul III convened the Council of Trent. As Charles predicted, it reformed the corruption present in certain orders of the Catholic Church.

In commemoration of the Swiss Guard’s bravery in defending Pope Clement VII during the Sack of Rome, recruits to the Swiss Guard are sworn in the San Damasco courtyard in the Vatican City on 6 May every year.