Nearly one month ago we wrote a tale about the 15th-century frescoes inside the Sistine Chapel. We mentioned their theological and artistic importance and underlined how they influenced the following masterpiece accomplished by Michelangelo Buonarroti: the ceiling of the Sistine Chapel.

The fatal year, 1508, is an extraordinarily important date in the universal history of the arts. That year Julius II, a pope who seemed to like politics and war more than he loved painting, appointed a twenty-five old boy, Raphael Sanzio of Urbino, to decorate his private rooms and Michelangelo Buonarroti, a young man of thirty, to paint the ceiling of the Sistine Chapel. The contract date is 8 May 1508, while the first part, from the entrance to the center, was inaugurated on 15 August 1511; the work was completed on 30 October 1512. 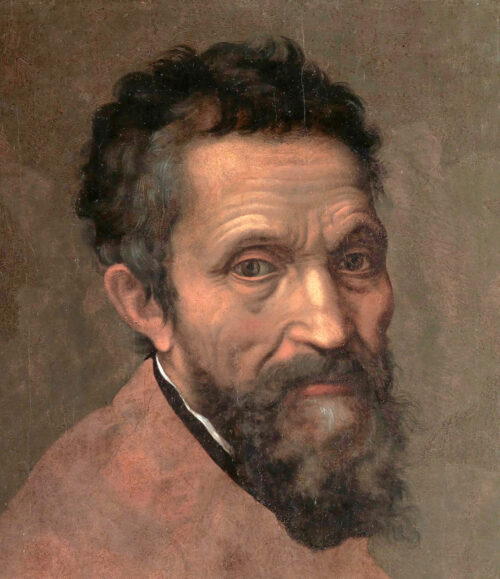 The artist, who worked continuously for four years painting the Ceiling of the Sistine Chapel, was a man still in the prime of life, who tackled the job with great energy and steely determination, rejecting assistants and collaborators, in solitude, as a kind of duel, a hand-to-hand combat with the plaster on which the figures were to be placed. As everyone knows, Michelangelo was a successful builder of his own image. A uniqueness, fastidiousness misanthropy, and surly, lonely, and angry temperament were undoubtedly distinctive features of his character. Buonarroti not only did nothing to hide or change them but rather highlighted them so to build on them a heroic existential profile, subsequently amplified by contemporary literature; from his biographer Condivi, to Giorgio Vasari in his Lives (1550,1568) the historiographic legend grew of the divine Michelangelo, the supreme vertex in the centuries-old story of the arts. The story of the Sistine Chapel ceiling and of how the artist tried to represent himself becomes clear from a document kept in the archives of Casa Buonarroti in Florence. It is an autographed leaflet on which, next to the caricature of himself represented in the act of painting in an uncomfortable position, we read:

I’ve grown a goitre by dwelling in this den-

As cats from stagnant streams in Lombardy,

Or in what other lands they happen to be-

Which drives the belly close beneath the chin:

My beard turns up to heaven; my nape falls in,

fixed on my spine: my breast-bone visibly

Bedews my face from brush-drops thick and thin.

My feet unguided wander to and fro.

Michelangelo worked essentially alone on the scaffolding of the Sistine Chapel. He had some problems at first because he had not fully mastered the fresco technique, but took them in his stride and soon found the right working pace. In fact, Michelangelo was left free to organize the worksite and to draw the figures on the ceiling as he wanted, using the skills of whoever he wished. The 1508 contract provided for an iconography that the artist radically reinvented.

Inside a faux architectural frame, which is a masterpiece of perspective illusionism, an impressive universe of facts and figures is to be found.

At center, nine rectangles, four large ones and five small ones, are filled with scenes from the Genesis.

Whoever contemplates the Ceiling of the Sistine Chapel in its iconographic sequence, scrolling the episodes of the Genesis one by one, notices that the scenes, starting from the bottom wall with the Drunkenness of Noah and the Flood (the first to be painted) towards the start of the biblical narrative, become simpler, acquire grandeur of shapes and a more certain perspective.

What is surprising, in the Ceiling frescoes, is Michelangelo’s formidable ability to radically and brilliantly reinvented iconographies consolidated for centuries.

The creation of Man had always been shown, even by the greatest artist, as a more or less literal figurative translation of the biblical text. God kneads the image of man from the ground, blows into him the spirit of life ,and gives him immortal soul and destiny.

Michelangelo rejects traditional iconography and invents another so new and so striking that five centuries later it is still capable of arousing emotions and amazement. There is no trace of naive materialism in Michelangelo’s Creation of Adam. The first man is lying on the ground, he comes from the earth but it is the spark that emanates from God’s index finger touching his, which creates him, as if by the transmission of some electrical fluid.

We quickly realize that a formidable and impeccable theological system governs the design of the ceiling. Although the symbolic role entrusted to the twenty “ignudi”, splendid athletic nude males who, placed in the corners sitting on the plinths, frame the scenes of Genesis and lean on or are draped in a variety of items which include pink ribbons, green bolsters and enormous garlands of acorns allusive to the name and glory of Pope Julius¹ della Rovere, is not completely clear, quite obvious on the contrary is the meaning of the twelve gigantic figures of the Seers. They are the images of seven prophets of the Old Testament and five prophetesses of the classical tradition. All of them are evoked from the depths of history, from the sub Lege world ,and from the extra Legem world. They signify Hope and Expectation, they prophesy the Saviour to come and whose incarnation generations of Ancestors placed in parallel series underneath the vaults of the lunettes obscurely prepare.

Among them all, the prophet Jonah has a privileged place and special significance. The Bible says that Jonah refused to obey the command of the Lord who had sent him to preach to the sinners of Nineveh. So it happened that the prophet was thrown into the sea by the sailors of his ship and that he was swallowed by a huge fish and, after three days, was washed up alive on a beach. The prophet is therefore a symbol of forgiveness and repentance, both supreme sacramental powers of the Church, but also the figure of Christ, who was resurrected after three days. When, many years later, Michelangelo painted the Last Judgement, Jonah was placed immediately above Christ Resurrected come to judge the living and the dead. The scriptural connection thus appears perfect. Let us, at this point, try and reconsider the ceiling of the Sistine Chapel as a whole; teeming with hundreds of figures, Michelangelo completed his huge enterprise on 30 October 1512 after four years of tireless work. 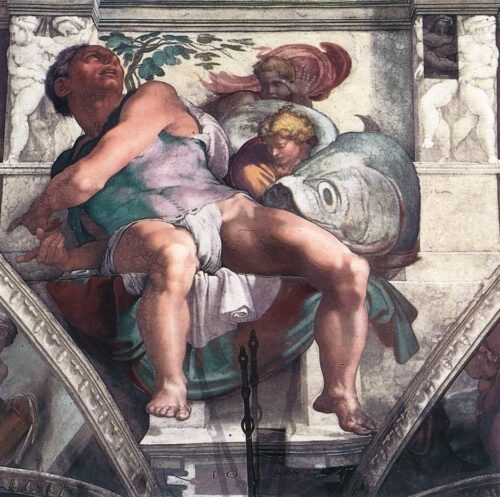 In the center, the scenes of Genesis, succeeding one another, tell the cosmogony, the origins of Man, the Original Sin, the fatal eruption of Evil into history. Mankind is inexorably consigned to Evil, Violence and Death. But God does not abandon it. He intervenes to protect the Chosen People in the biblical episodes described in the plumes in the corners of the ceiling: The Punishment of Haman, who wanted to exterminate the Jews, the Bronze Serpent, lifted up to the Exodus tribes to heal them from the bites of reptiles; the Slaying of Goliath by young David; the Return to camp of the Israelites of Judith who saved her people by beheading the evil Holofernes. God does not withdraw from History: he allows human beings to cultivate Expectation and Hope. Testifying to the Christ to come, in the fullness of time, in fact, are the Prophets and the Sybils, while his advent on earth is slowly, painstakingly prepared by the generations of Ancestors.

Keep reading us and in the next weeks we will narrate more tales about the Sistine Chapel and the Last Judgement painted by the gorgeous Michelangelo Buonarroti.