Today we talk about one of the main attractions in Rome, or actually in the Vatican City, the Sistine Chapel. The chapel is such a special, interesting place that we will dedicate three tales to it. Today we discover what is represented on the lateral walls of the Sistine Chapel.

Every day at least twenty thousand people visit the Sistine Chapel, with peaks of twenty-five thousand during periods of maximum tourist flow. Such visitors come from all cultural backgrounds and speak many different languages. Some are religious, others are not. The Sistine Chapel is a fatal attraction, the object of desire for the international Museum population, for migrants of so-called cultural tourism. However, the Sistine Chapel, although part of a museum path, is not a museum.

It is a religious space, a consecrated chapel.

In the center there was the Assumption of the Virgin, a masterpiece by Pietro Perugino¹, also demolished to allow Michelangelo to complete his huge fresco of the Last Judgment.

The artwork on the 15th century Sistine Chapel is clear: Moses and Christ are the two legislators – Moses in the Old Testament and Jesus in the New Testament.

A meaningful fact (strategic placement is not random) is that the first glance of those who enter the Sistine Chapel goes to the panel with the Consignment of the Keys to Saint Peter by Pietro Perugino, the iconographic conclusion of the series which occupies the right wall.

In a large and ancient square, like the majesty of Rome, amplified by a low perspective which has its focus on the centrally-planned building in the background, two monumental figures face one another. One is Christ entrusting to Peter the keys of the Kingdom, the other is Peter who, on his knees, receives them. The primacy of Peter, and therefore of the Roman pontiffs – the rock on which the universal Church is built, is represented with majestic simplicity and charming naturalness. 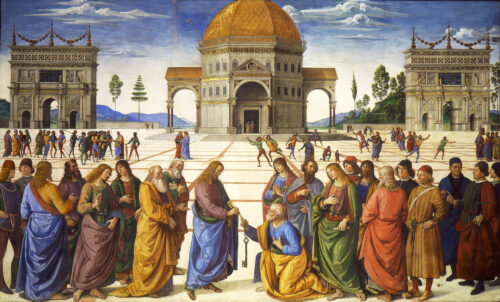 One thing the visitor must keep in mind when contemplating the wall frescoes commissioned by Pope Sixtus IV della Rovere is that the Mosaic series and the Christological series are interrelated and reflect one another.

There are two levels, both necessary and practicable, to enter into the meanings of the 15th century Sistine Chapel: the scriptural theological level and the historical-artistic level.

Referring to the scriptural theological level, the Magna chapel of the pope of Rome, as large as the lost Temple of Jerusalem, is the Ark of the New Covenant, the synthesis and figure of the mission and destiny of the Church, the representation of the History of Salvation.

The opposing cycles with episodes from the life of Moses and Jesus tell us how the new Law has consumed and finally overcome the Old Testament. The uninterrupted series of popes, successors of Peter, assures us that the new Law is kept and administered by the Church established by Christ himself (the Consignment of the Keys to St Peter).

On a historical-artistic level, we can say that when the pope opened the pictorial cycle, on August 1483, the Renaissance came to Rome. The Sistine Chapel artists, such as Botticelli, Ghirlandaio, Perugino, and Signorelli, brought to the Vatican perspective, naturalism, illusionism, compositional and scenic skill, the friendship of colors, the infinite and infinitely seducing world of visible beauty and human attitudes, emotions, affections.

In fact, the frescoes of the Sistine Chapel, completed in an incredibly short time, between the autumn of 1481 and the summer of 1483, constitute the most extraordinary pictorial anthology of the Italian Renaissance at its highest point.

Our advice is to devote ample time to Botticelli, Perugino, Ghirlandaio, and the other Tuscan and Umbrian masters of the 15th-century Sistine Chapel, without being straight away captured by Michelangelo.

Also because the best way to understand Michelangelo’s style is to, first of all, appreciate the cultural context in which he grew up. It is in fact from this set of masterpieces – from Ghirlandaio, in whose workshop Michelangelo worked as a young apprentice, from Botticelli and Perugino, whose acquaintance he was able to make in life – that the dizzy acceleration originated which, in little more than twenty years, brought about the frescoes of the ceiling.

Keep reading our tales and soon we will write you more stories about the artists and masterpieces inside the Sistine Chapel, or book one of our Vatican Tours and come and see this gem with your eyes.