Would you like to see a starry night in a dome? Would you like to visit one of the most fascinating and least known cupolas in Rome? Then you need to come to Rome and take a stroll in the Prati district and visit the church of San Gioacchino. Come and take one of our walking tours. We’d be glad to show you this and other curiosities in Rome. Come and see the starry night in a dome.

The Church of San Gioacchino

This church was built by Pope Leo XIII, who wanted to celebrate his priestly jubilee. The foundation stone was laid in 1881. The  the church was opened to the public in 1898 but the works were not completed until 1911. It was dedicated to San Gioacchino (St Joachim), the father of the Virgin Mary, in memory of the pope’s baptismal name.

The church, built by architect Raffaele Ingami, has three ailes, in the shape of a Latin cross, divided by pink granite columns with bronze capitals. It is sumptuously decorated with polychrome marble and metal furnishings. The central door is flanked by two columns donated by the Tsar of Russia.

The Starry Night in a Dome

The special feature of the church is the dome. It is octagonal in shape and was built in 1897. It is made of aluminium and perforated with crystal stars. This particular structure, as you can imagine, lets the light filter through in a unique and impressive way. It looks like a starry sky and the light  that filters on the altar is of a wonderful shade of blue. 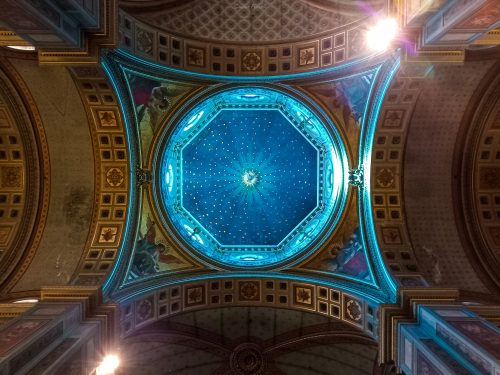 Dome of San Gioacchino in Rome

Other curiosities of the church

In addition to the beautiful starry night and the fascinating blue light which filters on the altar, the church has 14 side chapels, dedicated to fourteen of the twenty-seven Catholic nations that contributed their offerings to the construction of the building.