We would be glad to show you this beautiful spot in Rome. Come and select one of our wonderful TOURS and we’ll be glad to accompany you and reveal the many curiosities and legends of Rome!

Pope Urban VIII commissioned Pietro Bernini in 1623 to build the fountain. It was part of a prior Papal project to erect a fountain in every major piazza in Rome. The fountain was completed between 1627 and 1629 by Bernini (father). Most probably it was completed by his son Gian Lorenzo Bernini, especially after his father’s death on August 29, 1629.

THE HALF SUNKEN SHIP UNDER THE SPANISH STEPS

The sculptural fountain is made into the shape of a half-sunken ship with water overflowing its sides into a small basin. The source of the water comes from the Acqua Vergine, an aqueduct bult in ancient Roman times. Since the water pressure in this spot is very low, it did not allow the creation of gushes or waterfalls.  Bernini had to find a way to solve the problem. His idea to solve it, was amazing. He built this fountain slightly below street level in order to facilitate the water flow. This solution has in no way compromised the beauty of the fountain, but rather made it unique. 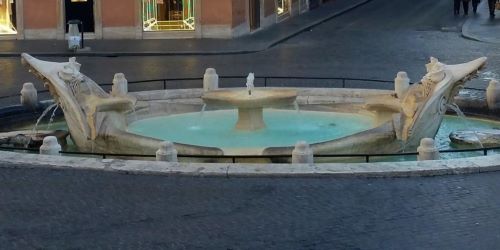 In addition to the water pressure problem,  Bernini’s decision to design the “Barcaccia”as a half sunken ship under the Spanish Steps, comes from an old legend. According to this legend, the River Tiber flooded in 1598 and the water carried a small boat into Piazza di Spagna. When the water dried out, the boat remained at center of the square for some time… This seems to have inspired Bernini’s creation.

We would be glad to show you this unique spot in Rome. Come and select one of our wonderful TOURS and we’ll be glad to accompany you and reveal the many curiosities and legends of Rome!