Where is the marble head exactly?

In one of the many Roman buildings which delimit Piazza Navona, precisely at number 34, if you look up, you can see a small a marble head protruding from the façade. Why is there this lone face and what does it represent? 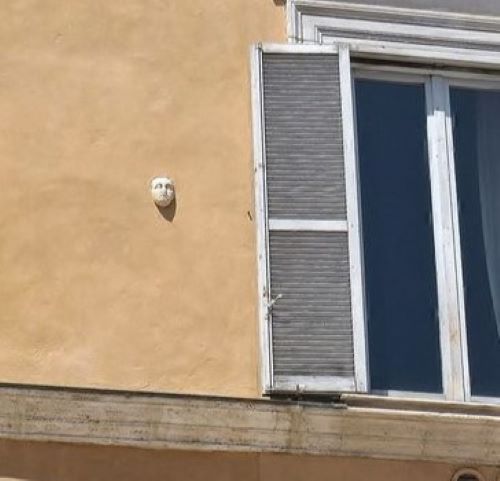 The story of the small marble head

A popular tradition passed down to us through the centuries, tells that in the second half of the 16th century, Pope Sixtus V, liked to mingle with the crowd, disguised as a commoner, to measure his level of popularity among the Romans.

The Pope would take off his pontifical robes, dress in other, less elegant clothes and mingle among the common people, trying not to be recognised, to hear what people really thought of him.

One day, while lingering in a tavern in Piazza Navona, he overheard the speeches of an innkeeper, who was very critical of papal power. The innkeeper was in fact complaining, and repeatedly insulting the Pope, in relation to a new wine tax.

The next day, the innkeeper found gallows set up in front of his tavern. He was happy of this because he was looking forward to the money, he would have made from the people who would have crowded nearby to assist to the execution. But…. most unfortunately… the gallows were intended for his head!!!!

In fact, the poor innkeeper was arrested and immediately executed. His head was cut off right in front of his inn!!

Where the little head comes from

His friends, in the memory of the man, decided to have a portrait of their friend sculpted and placed in the wall. To this day, that marble head still stands there, as a warning and advice not to speak carelessly about anyone in front of strangers.

Some say that the small head is simply the head of a ghost. But old romans still believe that the innkeeper’s legend is true. So… remember… if you come to Rome and have the chance take one of our TOURS, we’ll go to Piazza Navona. We’ll make sure to take you to the see the small marble head and tell you all the details of the terrible story!