Trastevere, the iconic district of Rome, is the site of one of the oldest local festivals in Rome. The traditional “Festa de Noantri” in Trastevere. It is one of the oldest and most loved celebrations for Rome and the Romans. It is a special celebrations for the inhabitants of Trastevere in particular. Come and see what happens in Trastevere during the traditional “Festa de Noantri”. Come and walk around with one of our special Tours. It is the right time to do so! Come and #feeltheessence.

The traditional expression “La Festa de’ Noantri” means  “of the rest of us”, as opposed to “the rest of you” who live in other districts. It is the festival in honour of the Blessed Virgin of Carmel (Beata Vergine del Carmelo) and is celebrated on her liturgical feast day in the Trastevere district of Rome. It is undoubtedly one of the most heartfelt feasts among the Roman people. The origins of the feast date back to 1535, making this one of the oldest local celebrations in Rome. 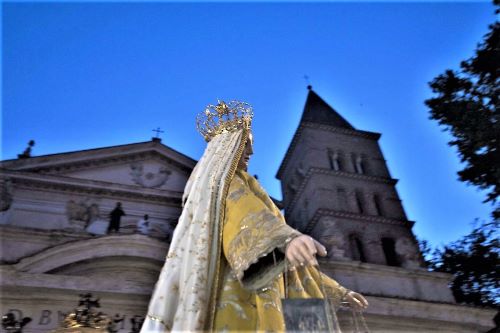 The legend behind the “festa de Noantri” in Trastevere

The legend says that after a storm, a statue of the Virgin Mary carved from cedar wood was found at the mouth of the Tiber by some fishermen. The Madonna, for this reason, was called “Madonna Fiumarola” (the virgin of the river). It was donated to the Carmelites of the church of San Crisogono in Trastevere (in Piazza Sonnino). After this it was named the patron saint of Trastevere and of its residents.  The Madonna was originally housed in a chapel specially built for it by Cardinal Scipione Borghese where it remained until 1890. After this, the building was demolished to make way for the construction of Viale del Re, now Viale di Trastevere.

The celebrations of the “festa de Noantri” in Trastevere

According to tradition, the statue of the Virgin leaves its abode in the church of Sain Agata once a year: on the first Saturday after the feast of the Blessed Virgin of Carmel, which is celebrated on  July 16th.

A programme of events and celebrations that last six evenings, from  July 18th to 23rd, will take place in Trastevere in its historical squares. Come and see what happens in Trastevere during the traditional “Festa de Noantri”. Come and walk around with one of our special Tours. It is the right time to do so! Come and #feeltheessence.