The Turtle Fountain in Rome or in San Francisco (California)? There are many wonderful fountains in Rome but one of them, is different from the others. Have you ever seen the “Turtle Fountain” (Fontana delle Tartarughe)?

The fountain was built between 1581 and 1588 on a design by Giacomo della Porta (1533-1602) and the sculptures were made by the Florentine artist Taddeo Landini (1550-1596). The fountain is placed in Piazza Mattei since, Muzio Mattei, insisted to have it built in front of his palace. He promised, in return, to pave the square and keep the fountain clean. This is one of the spots we like to share with our guests during the ESSENCE OF ROME PRIVATE TOUR, the SUNRISE TOUR and the JEWISH GHETTO TOUR.

THE STRUCTURE OF THE FOUNTAIN

The precious marbles used, characterize the Fountain of the Turtles. The name of the fountain comes from the inclusion of 4 turtles in the structure. These four turtles placed on the edge of the upper basin, traditionally attributed to architect Gian Lorenzo Bernini, are a successful completion of the work carried out during the restoration of 1658-59, under pope Alexander VII (1655-1667).

Experts say that the turtles may have been added later. They may have been designed to fill unjustified gaps which appeared after the renovation, when the hands of the statues did not reach the edge of the upper basin. 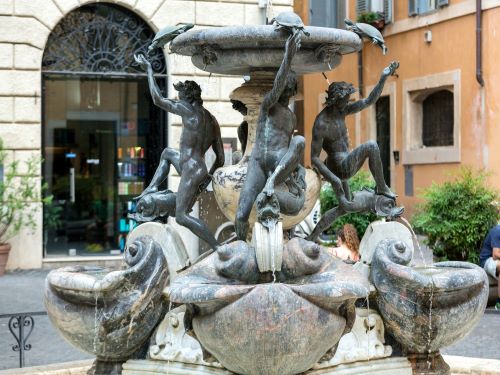 The Turtle Fountain in Rome

THE TURTLE FOUNTAIN IN ROME OR IN SAN FRANCISCO?

The greatest peculiarity of this fountain comes from the fact that there is a perfect copy in the Huntington Park in San Francisco, California. A copy of the fountain was manufactured in Rome at the beginning of the 20th century. William and Ethel Crocker purchased it for their villa. Their children donated it to the city of San Francisco in 1954 where it currently stands.

Come and visit us and we’ll take you to see this incredible location. For more information, click here.