The location of the twin fountains

The twin fountains dominate Piazza Farnese, right beside Campo de Fiori, just in front of the beautiful Renaissance palace of the Farnese family, currently the premise of the French Embassy in Rome. Pope Paul III moved the basins to the Piazza. He decided to move a large grey granite basin from St. Mark’s Square in the first half of the 16th century.

Decoration and location of the first twin fountain

The first basin moved to piazza Farnese was decorated with rings and lion heads. The basin originally came from the Baths of Caracalla. It is said they were transported to Rome from Egypt. In the location selected by the Pope, probably had only an ornamental function, and was not a fountain. The area was not served by aqueducts. It was used as a privileged point of view for festivals and shows of all kinds. 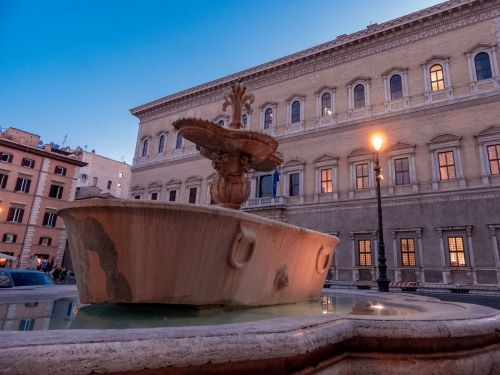 Some forty years later, Cardinal Alessandro Farnese moved a second, almost identically shaped basin to the piazza, also originally placed to adorn St. Mark’s Square. The Cardinal placed them both in the position they occupy today. The water to feed them, however, did not arrive until the first half of the 17th century, with the restoration of the ancient Trajan aqueduct, rebuilt as Acqua Paola.

How the larger basins came about

Thus, in 1626 they were finally transformed into fountains. They were designed by Girolamo Rainaldi and placed inside much larger travertine basins resting on a step. In middle, the designer placed the fleur-de-lis, the emblem of the Farnese family, from which a gush of water emerges.

The two fountains differ in only a few details. The northern one, closer to the church of Santa Brigida, is slightly smaller and almost perfectly preserved. There are onlt small signs of restoration in the lion heads. On the other hand, the other basin does not seem to have undergone any reworking and is therefore closer to the original workmanship.