The Colosseum is the most symbolic monument of Rome. All of our clients booked a Colosseum Tour with us, everyone wants to hear the stories about the fights, the animals and the construction of the Colosseum, a structure that still stands after 2,000 years. Since few years is also possible to take a tour of the undergrounds of the Colosseum, as they’ve been excavated and studied by many scholars, and they’re one of the main attractions of the monument.

So let’s discover together some interesting details about the most hidden area of the Colosseum!

The floor of the colosseum, where you might expect to see a smooth ellipse of sand, is instead a bewildering array of masonry walls shaped in concentric rings, whorls, and chambers, like a huge thumbprint. The confusion is compounded as you descend a long stairway at the eastern end of the stadium and enter ruins that were hidden beneath a wooden floor during the nearly five centuries the arena was in use, beginning with its inauguration in A.D. 80. Weeds grow waist-high between flagstones; caper and fig trees sprout from dank walls, which are a patchwork of travertine slabs, tufa blocks, and brickwork. The walls and the floor bear numerous slots, grooves, and abrasions, obviously made with great care, but for purposes that you can only guess.

Reconstructing the complex machinery that once existed under the Colosseum floor by examining the hypogeum’s skeletal remains, scholars had demonstrated the system’s creativity and precision, as well as its central role in the grandiose spectacles of imperial Rome. 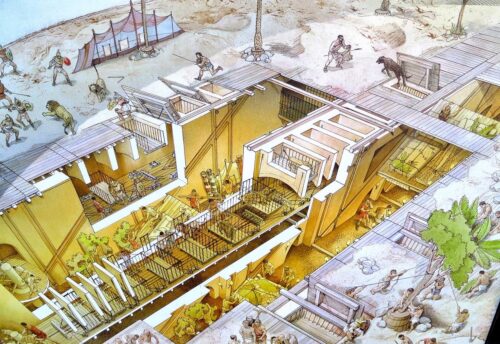 When a team of German and Italian archaeologists first began exploring the hypogeum, in 1996, they were baffled by the intricacy and sheer size of its structures: they understood why the undergrounds of the Colosseum had never been properly analyzed before then. Its complexity was downright horrifying.

The disarray reflected some 1,500 years of neglect and haphazard construction projects, layered one upon another. After the last gladiatorial spectacles were held in the sixth century, Romans quarried stones from the Colosseum, which slowly succumbed to earthquakes and gravity. Down through the centuries, people filled the hypogeum with dirt and rubble, planted vegetable gardens, stored hay, and dumped animal dung. In the amphitheater above, the enormous vaulted passages sheltered cobblers, blacksmiths, priests, glue-makers, and money-changers, not to mention a fortress of the Frangipane, 12th-century warlords. By then, local legends and pilgrim guidebooks described the crumbling ring of the amphitheater’s walls as a former temple to the sun. Necromancers went there at night to summon demons.

In the late 16th century, Pope Sixtus V¹, the builder of Renaissance Rome, tried to transform the Colosseum into a wool factory, with workshops on the arena floor and living quarters in the upper stories. But owing to the tremendous cost, the project was abandoned after he died in 1590.

In the years that followed, the Colosseum became a popular destination for botanists due to the variety of plant life that had taken root among the ruins. As early as 1643, naturalists began compiling detailed catalogs of the flora, listing 337 different species.

By the early 19th century, the hypogeum’s floor lay buried under some 40 feet of earth, and all memory of its function—or even its existence—had been obliterated. In 1813 and 1874, archaeological excavations attempting to reach it were stymied by flooding groundwater. Finally, under Benito Mussolini’s glorification of Classical Rome in the 1930s, workers cleared the hypogeum of earth for good.

The network of tunnels involved multiple lifts and trapdoors, and an impressive amount of machinery and manpower was required to start the show. The area beneath the arena would have been infernally hot, with little ventilation, and you can imagine the slaves and gladiators sweating and suffering in the dark lifts and tunnels. The lions and tigers that sometimes took part in the spectacles were kept in cramped cages before making their dramatic entrance through a trapdoor in the arena.

Experts have made a wooden reconstruction of the massive lift used to transport the animals. Seeing this modern reconstruction juxtaposed with the crumbling remains of the tunnels really helps you to imagine what it would have been like, especially as your guide tells you stories of the games. Exploring the tunnels with a guide brings the past vividly to life, as you learn of the mechanics behind the staged sea battles and the remnants that are still being uncovered by archaeologists today. Recent discoveries include fruit seeds, jewelry, and gaming dice that were lost or discarded by spectators, and which ended up in the tunnels. These findings may not be as exciting as gory battles, but they give us some insight into the people who came to watch the games – spectators who liked to have a snack and gamble during the intervals. The visit is full of interesting little details like this, humanizing the past. 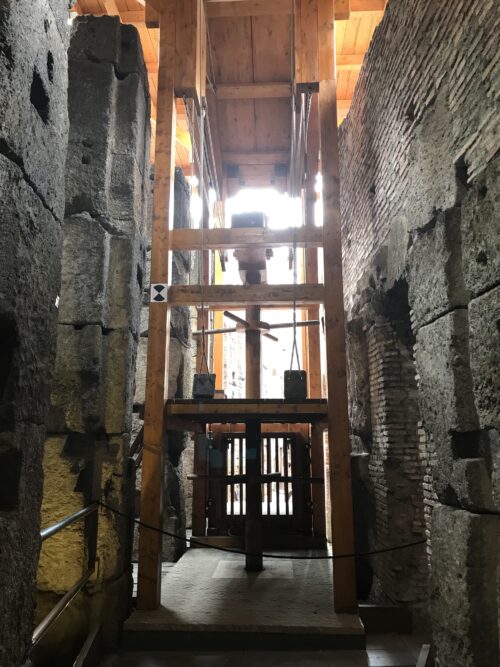 One of the many advantages of experiencing the Colosseum on a guided tour is that you can skip the line, which means spending more time exploring Rome, and less time waiting around.

A Colosseum Tour is full of vivid details and stories. These anecdotes would be fascinating even if you were only reading them in a book, but standing in the same place where thousands of people fought and died is a much more profound experience. Descending into the tunnels below the arena, you continue to walk in their footsteps, while also gaining a greater understanding of how the Colosseum worked.