Today we talk about one of the most famous domes in the world, the one that tops the Basilica dedicated to the first pope of history, Saint Peter.¹

Climbing this incredible masterpiece of italian Renaissance architecture, started by the brillant Michelangelo Buonarroti, is something that everyone wants to challenge once in Rome. Indeed the ascent is pretty steep, there’re 320 steps taking to the top of the cupola where is possible to admire the most stunning view over the city.

But up unitl 1937 there were people climbing the dome in an incredible challenging way, in fact every year on the 29th of June the 360 so called Sanpietrini, actually climbed down the dome to light up thousand of torches which lit up the entire structure. It was definetly an incredible show, described by poets as Goethe in 1780.

“The illumination commences at the Ave Maria, when the gathering shades of night render it every moment more brilliant. All the architectural points of the church, its columns, capitals, cornices and pediments, the magnificent swell of the lofty dome, with its converging ribs, surmounted by the lantern and crowned by the cross, are all designed in golden lines of fire, as is also the vast sweep of the colonnades, being all lighted with 4,400 transparent lamps. In the first instance the illumination appears to be complete; but while we gaze on it with delight, the great bell of St. Peter’s chimes, when on the luminous cross, at the top, waves a brilliant light, as if wielded by some celestial hand; and instantly globes and stars of vivid fire seem to roll spontaneously and self-kindled along the whole of the cupola, façade and portico, which burst in a moment into one dazzling blaze of glory. This instantaneous illumination, which seems the work of enchantment, is accomplished by the unseen agency of 360 men, who, with lighted torches carefully concealed, are suspended by ropes even from the swelling surface of the vast dome and the towering summit of the cross, and who to the 4,000 lamps add 1,000 large lamps filled with pitch, rosin and other inflammable substances. Seen from the top of the Spanish Steps the dome seems some supernatural creation, suspended in air from the vault of heaven, or held beneath its azure concave expanse by some mighty and mysterious hand; while its masses of flame, rendered tremulous by the curling night-breeze, appear like so many distant comets arrested in their devious courses by the fiat of Omnipotence”. 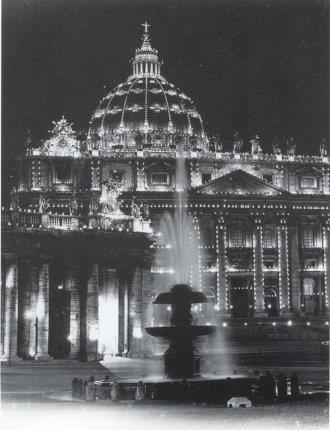 During our Saint Peter’s Dome and Castel Sant’Angelo Tour we visit the two main places where still today happen the biggest cerimonies to celebrate our two patron saints on the 29 of June.

For more info about tours in the Vatican and Castel Sant’Angelo: