THE LOCATION OF TRAJAN’S MARKET

The Trajan’s market  has miraculously come down to us. From the heart of the ancient city, in close connection with the great squares of the Imperial Forums, Trajan’s market still stands in the centre the city today.

It is located on the Via dei Fori Imperiali, at the opposite end to the Colosseum. The surviving buildings and structures were built as an integral part of Trajan’s Forum and lie on the side of the Quirinal Hill. 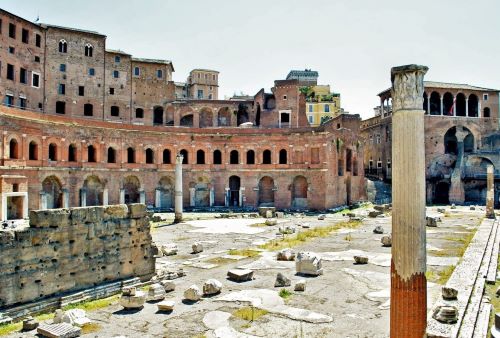 THE DIFFERENT USES OF TRAJAN’S MARKET

Trajan’s Market was probably built in 100–110 AD by Apollodorus of Damascus, an architect who always followed Trajan in his adventures and to whom Trajan entrusted the planning of his Forum.

The Markets of Trajan are an archaeological complex with absolutely unique characteristics in Rome. The monument has lived through the evolution of the city from the imperial age to the present day, constantly reused and transformed. As a testimony to the fervent commercial activity of imperial Rome, the buildings were firstly used a shopping centre.  The complex was then trasformed during the Middle Ages. In 1200, floor levels were added together with defensive elements. In the 16th century it was transformed once again in a convent. It was then transformed in barracks. These were demolished at the beginning of the twentieth century to restore Trajan’s Markets to the city of Rome.

Come and visit this architectural wonder in continuous evolution. Come and see history’s first shopping centre. It is not as famous as the Colosseum, but Trajan’s Market is a very important and well preserved site. The first shopping centre in history is worth a Tour. Select your preferred one HERE, we’d bel glad to accompany you! Come and #feeltheessence!