The Lupercalia were a series of celebrations which were as old, or older, of Rome itself, with links to Ancient Greeks, who celebrated the god Pan between the 13th and 15th of February. The Romans worshiped a similar god named Lupercus. Both civilizations used symbols for gods based on wolves. The rituals connected with the festival took place in the so called “Lupercal”, the cave where Romulus and Remus were nursed by a she-wolf name Lupa. The cave was on the Palatine Hill, and the Roman Forum, sites associated with Rome’s founding. We visit the Palatine Hill during our Extended Colosseum Tour and Colosseum and SUPER tickets Private Tour. 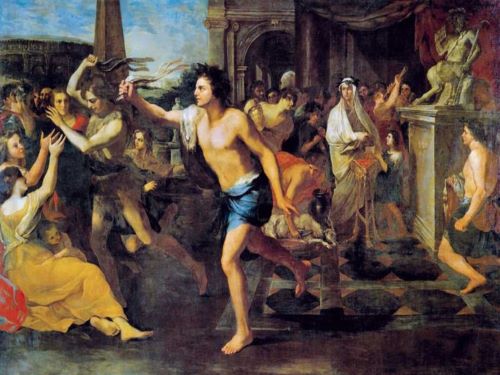 The rituals of Lupercalia; the pagan cerimony replaced by St. Valentine’s .

The rituals of Lupercalia included the slaying of sacrificial dogs and goats, the anointing of designated celebrants with the blood of the sacrifice, and then the manufacturing of crude thongs from the skin on the animals. The celebrations included also sacrificial meals and running from the cave to the Palatine Hill and the Roman Forum, before returning to the Lupercal cave. These rituals were supposed to bring fertility. When Pope Gelasius tried to end the festival, the Senate opposed him. But he still officially condemned these rituals. He opposed these pagan rituals by creating a feast day in honour of an early Christian (and Roman) martyr as a means of limiting the Lupercalia.

How Valentine came about

Pope Galasius decided to establish a feast for an almost unknown martyr. This was an attempt to subvert the pagan ritual of the Lupercalia and replace it. In 496 AD, the Pope added Valentine of Rome to the Calendar of Saints, with a Feast Day of February 14th. He cited his martyrdom in Rome in 269 AD.  Though there were several early Christian martyrs named Valentinus or Valentine, little is known of any of them.  The only reported fact is that he was buried on the Via Flaminia on February 14th.

Visit the Palatine Hill with our Extended Colosseum Tour and Colosseum and SUPER tickets Private Tour and its marvellous surroundings and see where Valentine’s Day began…a celebration that is old as Rome itself!