Do you know who is the little man sculpted in the famous “porter’s fountain” (Fontana del Facchino) in Rome?  It is one of the “talking statues” (statue parlanti) in Rome. These were used for centuries by the Romans to post satirical inscriptions against the popes and kings. Would you like to know more about this small fountain and the little man it portrays? Come to Rome, take one of our tours and we’ll take a walk and just a few steps away from the Pantheon, we could stop by this small fountain. Come to see the “porter’s fountain” and the little man it portrays.

Who is this little man in the fountain?

The most striking aspect of the fountain is the little man himself. Who is he? Why was he so important that they represented him in a fountain? He carries a small barrel, from which water gushes out into the small basin below. This man is none other than an “acquarolo” (the “water man” in Roman dialect). He was mistakenly referred to as a porter (which explains the name of the fountain). The “acquaroli’s” main task was to fetch water from the fountains, often from the Trevi Fountain, and then sell it. This was a night job. The “acquaroli” used to fill their little barrels, and then go from house to house during the day, trying to sell the water for a modest fee. In this way the Romans were spared the trouble of going to the fountains to gather water. 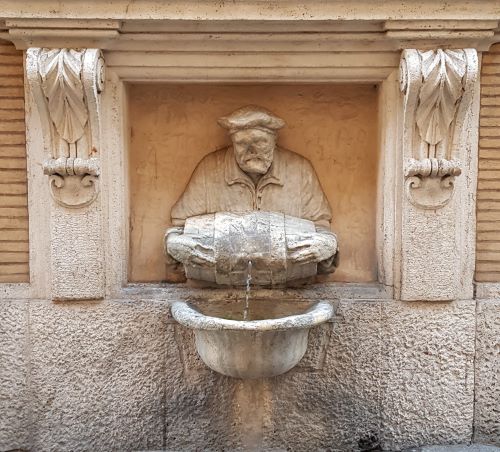 Fountain of the Porter

Where is the fountain?

The Fountain is on a small wall on the Via Lata. This famous road is only a few steps away for the Pantheon and from the Trevi Fountain. It is also very close to the Trajan Forum…. It is worth a tour!

What is so peculiar of this fountain?

The “acquaroli”, thanks to the Trevi Fountain, became a point of reference for many. But why did a city as big as Rome need such a worker? For the simple fact that, due to a series of sieges, the aqueducts built by the Ancient Romans were destroyed. This meant that getting water in Rome was not so simple. One had to go and collect it from the Tiber or to the fountains. Therefore, the city was filled with these “water professionals”.

When was the “porter’s fountain” built?

The Fountain of the Porter dates back to the 16th century and, although there is a popular legend claiming that the work is by Michelangelo, it is still full of mysteries and secrets. The fountain is probably the work of Jacopo del Conte, an artist who was very active in late 16th century Rome when the small fountain was probably made. Moreover, Jacopo lived nearby, where the Fountain of the Porter stands today.

It is very nice to think that this tiny work of art can represent a way of life in Rome.  It is a glimpse of 16th-century Rome. A marvel, that you can see while walking around the city. Come to Rome. Take one of our Tours. We’d love to share this and other stories with you. Come and #feeltheessence!