Did you know that in Rome, some streets have names that tell a story? This is the case of the famous Vicolo dell’Atleta (Athlete’s Alley) in Trastevere. While walking around the small typical streets of Trastevere with our guests, we took the opportunity of sharing this curiosity. Come to Rome and take one of our TOURS. We’ll be glad to share this, and many other small curiosities. Come and discover the story behind the name of this small street that is named after an athlete in the middle of Trastevere. Discover the secret of the famous Vicolo dell’Atleta.

Where is Vicolo dell’Atleta (the Athlete’s Alley)?

Vicolo dell’Atleta connects Via dei Salumi to Via dei Genovesi and it is in the heart of Trastevere. Many people while walking around Trastevere, wonder why there is a street named after an athlete in the middle of the houses…. The answer comes from…. centuries away….

Where does the small alley take its name?

The Vicolo dell’Atleta takes its name from a statue discovered in this place in 1849. While digging in this location, a wonderful marble statue appeared.  The statue represents an athlete known as ‘Apoxyòmenos’. This word comes from the Greek ‘he who cleanses himself’. In fact, the young man, is depicted precisely in the act of cleansing his right arm with his left hand using a tool called a “strigil”, with a curved blade, mostly made of bronze, but often also of silver or ivory. This tool was used specifically to cleanse the skin of oil, sweat or dust after a bath, competition, or fight. 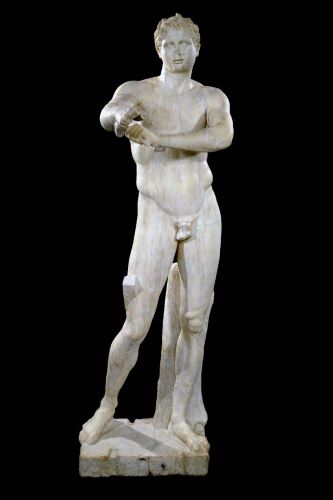 The alley took its present name in 1873 after the discovery of the statue, but it was once called the “Vicolo delle Palme” (Alley of the Palms), due to the presence of these trees. Palms were planted here probably as a Jewish symbol. This street in fact, was the location of one of the first Jewish settlements in Rome. The synagogue was active here from the time of the Republic, before its relocation to the S. Angelo district, which took place in the Middle Ages.

Where is the statue now and what is it’s story?

The statue now in the Vatican Museums, is a marble copy of the bronze original by the Greek sculptor Lysippus (4th century BC). It was originally placed at the entrance to the Baths of Agrippa. It is said that the Emperor Tiberius had the statue moved to his personal residence but was forced to return it in its original location, due to the insistence of the people.

The statue, currently in the Vatican Museums, is in substantially good condition. This is due to the interventions of the sculptor Tenerani, who carried out the restoration after its discovery. The statue was also cleaned in 1994.