If you need a quick escape from Rome you can easily plan a day trip to the beautiful Subiaco – an oasis in the Lazio region where natural beauty, spirituality, and Italian history meet.

Its location in the Natural Park of the Simbruini Mountains makes it a special place surrounded by forests, and water where you can enjoy a nice walk in nature while discovering some incredible monasteries. Subiaco is not just the cradle of Benedictine monasticism, but also the main town of the Aniene Valley.

Local folk legend recounts that it was the slaves engaged in the construction of the Nero’s Villa who founded Subiaco. However, according to historical sources, the first small settlements came into being in the 4th century AD, alongside the ancient Church of San Lorenzo.

Benedict of Norcia wrote his Benedictine Rule in Subiaco and founded twelve monasteries. He founded twelve communities for monks before moving to Montecassino in the mountains of southern Italy. The Order of Saint Benedict is of later origin and not an “order” as commonly understood but merely a confederation of autonomous congregations.

Benedict’s main achievement, his “Rule of Saint Benedict”, contains a set of rules for his monks to follow. Heavily influenced by the writings of John Cassian, it shows strong affinity with the Rule of the Master, but it also has a unique spirit of balance, moderation, and reasonableness which persuaded most Christian religious communities founded throughout the Middle Ages to adopt it. As a result, his Rule became one of the most influential religious rules in Western Christendom.

Unfortunately, the monastery of Santa Scolastica is the only one to have survived earthquakes and Saracen devastation. Founded in 520 AD, it is also the oldest Benedictine monastery in the world, and in 1465, in the Santa Scolastica Monastery, two pupils of Gutenberg installed the first Italian printing press and, thanks to the breakthrough of movable type, printed the first book in Italy. 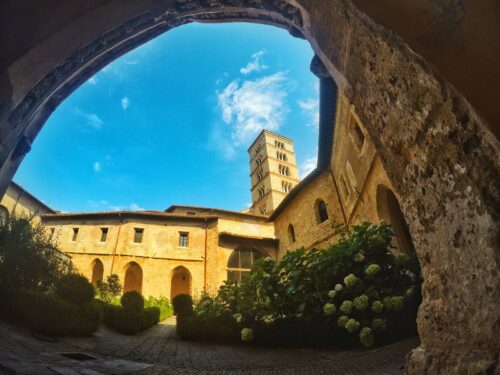 Located a few kilometers from the monastery proper, you find the Sacro Speco a sanctuary attached to the side of the mountain, supported by nine high arcades. 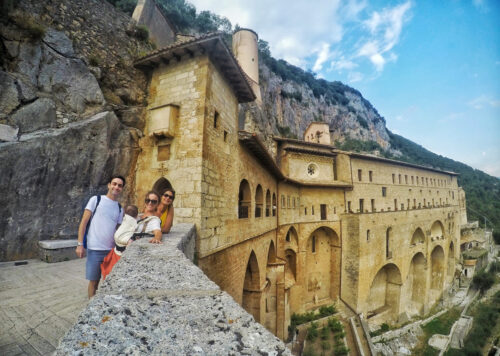 The interior is a maze of small cells, and chapels—including one over St. Benedict’s hermitage, others carved into the living rock. All is covered by frescoes of various periods. The upper church has works from the Sienese school (early 14th century), others from the Umbrian-Marche school (15th century), while in the lower church are works by Roman painters of the mid-13th century. There is a large statue of St. Benedict by Antonio Raggio, the great student of G.L. Bernini.

The frescoes include the representation of Saint Francis of Assisi¹, being the oldest known portrait in existence of the saint, having been drawn before his death. This dates back to St. Francis’s retreat to Subiaco (1223–1224): he is depicted without the stigmata and without a halo. 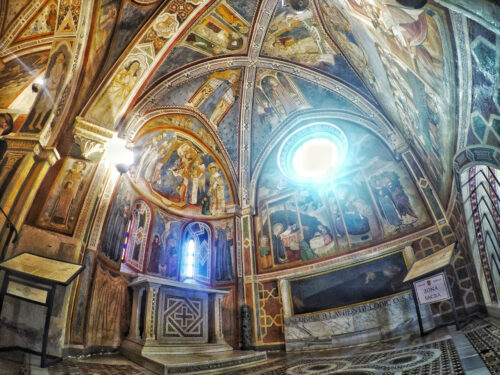 The Abbots’ castle, the Church of San Francesco,1327, with its wooden altars and exquisite paintings from the 15th and 16th centuries; the Churches of Sant’Andrea and Santa Maria della Valle: these are just a few of the stunning sights to be admired in Subiaco.

When in Subiaco you must not fail to visit the Santa Scolastica Monastery and the San Benedetto Monastery – two places of worship of unparalleled charm but also we consider very worthed to trek for plunging into the landscape. 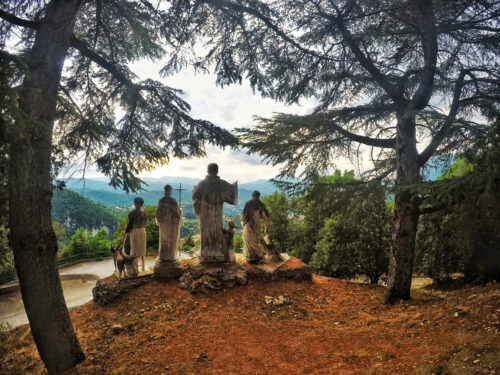 You can easily reach Subiaco from Rome, and it would be undoubtedly worth to spend a day away from the city, surrounded by water, nature, and mountains, while discovering mesmerizing monasteries dating back to centuries ago. Tell us which are the things you would like to discover during your Italian holidays, which kind of experiences you love the most, and we will customize your trip to Rome and its surroundings.