The fresco representing the prophet Jonah in the Sistine Chapel is huge. It measures 400×380 cm and has been completed by Michelangelo Buonarroti between 1511-1512  and is only a small part of the decoration of the vault of the Sistine Chapel in the Vatican Museums in Rome, commissioned by Julius II. We’d be glad to guide you through these amazing sites selecting one of our Vatican tours. We offer different options in our Vatican Tours in order to accommodate all your needs and requirements.

Jonah supposedly lived  between the IX century BC and the VII century BC. He was an ancient Hebrew prophet of the Old Testament and an entire Book bears his name. He is one of the twelve minor prophets and is venerated as a Saint by the Catholic Church and is commemorated on 21 September. 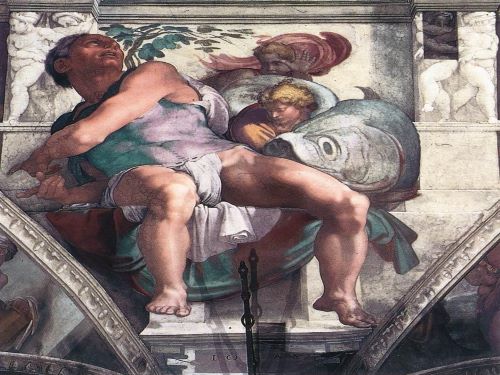 The Lord commands Jonah to go and preach in Nineveh. Instead, Jonah flees to Tarsis on a ship that is hit by a terrible storm. Jonah understands that he is to blame for the storm. The storm is surely a sign of God’s wrath. His refusal to obey the Lord caused the storm. The boat sinks. Jonah is thrown into the sea. At this point a “great fish” (usually referred to as a whale even if this is not specified) swallows him. He stays inside the fish for three days and three nights: During this time, Jonah prays for forgiveness and on divine command, the fish “throws-up” Jonah onto the beach. Jonah goes to preach in Nineveh obbeying God’s orders.  The story continues, but this part is the one represented in the Sistine Chapel of the prophet Jonah and his legend.

Michelangelo worked ten ‘days’ to fresco the prophet. During the restoration, some small dry repairs emerged, especially on Jonah’s legs (to correct and accentuate the foreshortening) and along the upper frame of the throne, to modify the incidence of light.

The prophet Jonah and his legend remain one of the most admired details of the Sistine Chapel. Come and see this with your own eyes. Take one of our Vatican Tours. Come and #feeltheessence!