The beauty of St. Peter’s Square is indisputable. Designed by Gian Lorenzo Bernini, its circular architecture leaves anyone who passes, stunned.  This is, not to mention the dome designed by Michelangelo. Probably the most famous dome in the world, which has dominated the Roman skyline for centuries. We’d like to take you visit these sites with one of our special tours which will surely surprise you. Select your favourite here.

But are you aware of the illusions of St. Peter’s Square? These were studied so that the square could appear even more suggestive to the eyes of its observers!

The columns of Saint Peter’s Square

Among the illusions, one of the most famous is certainly related to the 284 columns of St. Peter’s Square. Have you ever tried to place yourself in the center of the colonnade? There is a special mark on the ground. If you place yourself on that specific point (indicated by the engraving on the floor), suddenly the four rows of columns will disappear behind a single row!  A truly stunning optical illusion created  by the genius of Bernini. 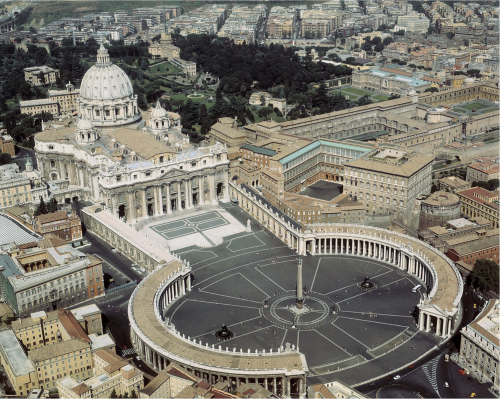 …And this is not the end of the surprises ….  There is a second illusion. Crossing the square, walking towards the columns, these seem to get closer and farther apart, creating the optical illusion of movement. Also this is comes from the perspective and geometric calculations made ad hoc by Bernini!

..and a third illusion

And a third illusion…. Looking at the main entrance, towards the façade of the Basilica (created by Maderno) one has the impression that the columns of the main door are of a different color. In reality this is not so. The trick lies in a mathematically calculated play of light, and in addition to this, the columns are convex and this makes the chromatic illusion possible.

Walk with us on St.Peter’s Piazza. Come and take one of our Vatican tours. Come and #feeltheessence.