Today we would like to tell you the story of the most unmissable monument of our city: the Colosseum.

Known as the Flavian Amphitheatre, the Roman Colosseum is one of the capital’s most remarkable monuments and is the main symbol of Rome.

The original name “Flavian Amphitheatre” was changed to the Colosseum due to the great statue of Nero that was located at the entrance of his Domus Aurea. It was a huge bronze statue, 30 meters high, called by everyone “The Colossus of Nero”. Shortly after Nero’s death in 68 AD, Emperor Vespasian added a sun-ray crown and renamed it, Colossus Solis, after the Roman sun god Sol. Around 128, Emperor Hadrian ordered the statue to be moved from the ancient entrance of the Domus Aurea to just northwest of the Colosseum, in order to create space for the Temple of Venus and Roma. It was moved by the architect Decrianus with the use of 24 elephants and it remained in its location probably until the Middle Ages, because a poem by Bede (c. 672–735) says: As long as the Colossus stands, Rome will stand, when the Colossus falls, Rome will also fall, when Rome falls, so falls the world. 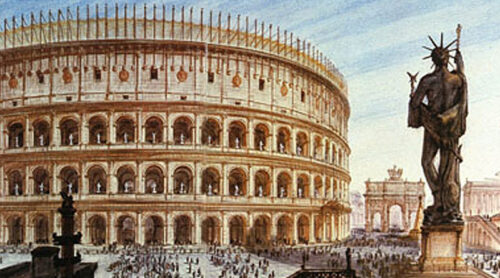 The construction of the Colosseum began in the year 72 AD under the empire of Vespasian and it was finished in the year 80 during the rule of his son, Emperor Titus¹. The inauguration of the monument was 100 days long and took the lives of more than 2,000 gladiators. After the inaugural games, the Colosseum became the greatest Roman amphitheater, measuring 188 meters in length, 156 meters in width, and 57 meters in height. 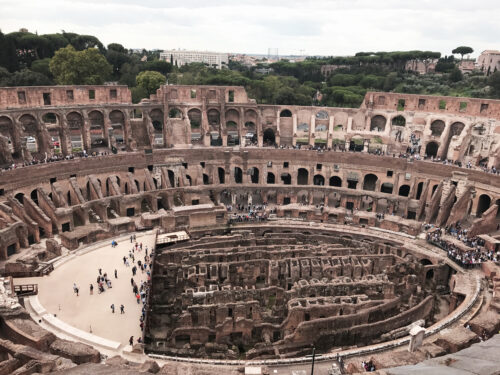 Unlike earlier amphitheaters, which were nearly all dug into convenient hillsides for extra support, the Colosseum is a freestanding structure of stone and concrete, using a complex system of barrel vaults and groin vaults. Three of the arena’s stories are encircled by arcades framed on the exterior by engaged columns in the Doric, Ionic, and Corinthian orders, and anciently decorated with marble statues.

During the Roman Empire and under the motto of “Bread and Circuses” the Roman Colosseum (known then as Flavian Amphitheatre) allowed more than 50,000 people to enjoy its finest spectacles, who were shielded from the sun by a massive retractable velarium (awning). Supporting masts extended from corbels built into the Colosseum’s top, and hundreds of Roman sailors were required to manipulate the rigging that extended and retracted the velarium.

The shows began in the morning with games called Venationes, where the Romans could see exotic animals, taken from the territories of the empire, fighting against each other. During the break, there were the public executions of criminals, and finally, in the afternoon, there were the famous fights of the gladiators. These shows kept the Roman people entertained for centuries. In fact, the Colosseum remained active for over 500 years, the last recorded games in history were celebrated in the 6th century.

In medieval times, the Colosseum was used as a church, then as a fortress by two prominent Roman families, the Frangipane and the Annibaldi. It was damaged by lightning and earthquakes and, even more severely, by vandalism and pollution. All the marble seats and decorative materials disappeared, as the site was treated as little more than a quarry for more than 1,000 years. Preservation of the Colosseum began in earnest in the 19th century, with notable efforts led by Pope Pius VIII, and a restoration project was undertaken in the 1990s. It has long been one of Rome’s major tourist attractions, receiving close to seven million visitors annually.

At present, the Colosseum is, along with the Vatican Museums and the Sistine Chapel, Rome’s greatest tourist attraction. Each year more than 6 million tourists visit it. On 7 July 2007, the Colosseum became one of the Seven Wonders of the Modern World.

It is an imposing construction that, with almost 2,000 years of history, will bring you back in time to discover the way of life during the time of the Roman Empire.

For more info about our Colosseum tours click HERE