Even if the centuries go by in Rome, certain traditions, even if related to death, are immortal. Have you ever heard of the suggestive and somewhat macabre night-time ceremony of the confraternity of the “Sacconi Rossi”? This is a macabre ceremony that takes place every 2 November at the Isola Tiberina (the Tiber Island) since the 17th century. Do you want to know more about this eerie tradition? Come to Rome! Take one of our Tours and we will share with you the story of the macabre ceremony of the “Sacconi Rossi”. Should you be around this weekend… it is something you can’t miss!

Who are the “Sacconi Rossi”

The “confraternity” of the “Sacconi Rossi” was created in the 17th century. Its full name is: “Arciconfraternita dei Devoti di Gesù al Calvario e di Maria Santissima Addolorata in Sollievo delle Anime Sante del Purgatorio”. In Rome, the confraternity is known simply as the “Sacconi Rossi”.  The term means: “red sacks”. They are called this way because of the red hooded cloak or sack they wear. 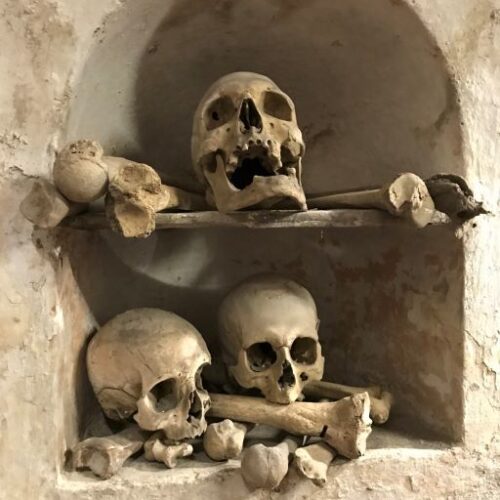 Macabre crypt of the Sacconi Rossi

Why are they so famous in Rome?

The confraternity was responsible of retrieving the corpses drowned in the Tiber. If no one claimed them, they were in charge of arranging  a Christian burial for them, and to pray for their souls. In addition to this, they were responsible of organizing masses for the unknown dead in their oratory on the Isola Tiberina. The cemetery was completely decorated with stripped bones artistically combined in an exquisit Baroque style. The bones served as a warning and an invitation to reflect on the transience and caducity of earthly life. The so called “memento mori”.

This cemetery (an ossuary) was at the same level as the Tiber River. Thie meant that the location was an unhealthy place and, due to flooding, it was often inaccessible. The site was used until 1836 when, due to an epidemic, Pope Gregory XVI (1831-1846) banned burials in the Oratories of the Churches and ordered to  use the Verano Cemetery exclusively. Following this decision, the Confraternity lost its importance to the point of extinction.

The Confraternity of the Sacconi Rossi was recently reconstituted. They celebrate a Holy Mass every 2nd November, in the church on the Tiber Island. A candlelight procession follows the celebration. This is in memory of those drowned in the Tiber (luckily not many nowadays!!) and of all the nameless dead.

The macabre ceremony of the 2nd November

The ceremony ends with the laying of a wreath in the water and the blessing of the bones in the small underground cemetery. The members of the Sacconi Rossi, dressed as per tradition in sackcloth and hood, retrace the same steps of centuries ago, giving life and voice to a Roman tradition unknown to most, but which we hope will continue to be part of our city.

This is a macabre ceremony that takes place every 2 November at the Isola Tiberina since the 17th century. It is an eerie tradition, but it is only one of the many we have in Rome. Come to Rome! Take one of our Tours and we will share with you the macabre story of the “Sacconi Rossi” and many others. If you be around this weekend… it is something you can’t miss!