What’s in the “backstage” of the Colosseum?

What’s in the “backstage” of the Colosseum? Walking through the reopened underground passages you will see the gladiators’ rooms, where they would wait to appear on the arena. You will see what is left of the cages of the ferocious beasts. A total area of fifteen thousand square metres. There are fifteen circular, dark corridors in which scenes for the battles were prepared.

You will be able to see all the “technical” apparatus that lies beneath the floor of the arena, in which several trapdoors opened. This “technical effect” allowed men and animals to appear by surprise from the ground. The gladiators, the beasts, and the setting for the battles were lifted to the arena by hoists through a complex system of winches.

Built of wood for the inauguration of the Colosseum, the dungeons were transformed during Domitian’s reign into stable masonry. This is what we see now. 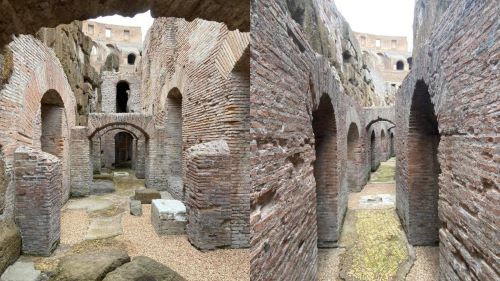 The Ipogeo – The Colosseum’s Backstage

What does the “backstage” of the Colosseum look like now?

So what does the backsage of the Colosseum look like today? Nowadays, the dungeons extend for about half a hectare. Fourteen corridors are visible, placed symmetrically on either side of the large central corridor. At the ends are the ‘manoeuvring chambers’. These are symmetrical rooms that housed large hoists, bordered by converging galleries, that were used as docks for the naumachiae (naval battles – see our posts on the naumachie HERE).  The atmosphere here is unique. You will be able to understand and feel what the gladiators must have felt before appearing on the arena. A truly unique point of view, which cannot be experienced in any other part of the world.

Do you want to see the Colosseum’s “backstage? Come and take one of our COLOSSEUM TOURS. Ask to see this very special part of the Colosseum. You will be able to see and walk through the backstage corridors, the ‘backstage’ of what was happening on the arena. We’d be glad to show you!