It’s summertime and in Rome the temperature is very high but we still like to tour late in the evening in the beautiful city center of Rome, through the alleys or in the famous squares such as the Spanish Steps, Navona Square, Trevi Fountain, Campo de’Fiori…

We all spend time in Campo de’Fiori, touring or for an “aperitivo”, surrounded by many joyful young people and not many seem to give importance to the statue of Giordano Bruno in the middle of the square.

Well, that statue is now the symbol of Campo de’Fiori, it is part of it and its history, but few people know the reason why it was placed in that square. 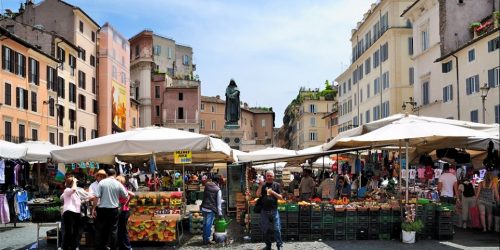 Made by Ettore Ferrari, it was commissioned in 1899 and it is said that the statue has been placed on the exact spot of the execution of Giordano Bruno. Around the base of the statue are visible moments of the trial and they show Giordano Bruno and Clement VIII, the pope who sentenced the monk to death.

Giordano Bruno was in fact a natural-born rebel.

Born Filippo Bruno (he embraced the name Giordano after monkhood), he was a native of Nola, close to Naples. He entered the order of the Dominican monks aged 17 and there continued his studies becoming an ordained priest in 1572, aged 24.

During his time in Naples, he became known for his skill with the art of memory and on one occasion traveled to Rome to demonstrate his mnemonic system to Pope Pius V. While Bruno was distinguished for outstanding ability, his taste for free thinking and forbidden books soon caused him difficulties. Given the controversy he caused in later life, it is surprising that he was able to remain within the monastic system for eleven years.

A mere four centuries ago, our tiny world was oblivious to the rest of the cosmos. There were no telescopes. The universe was only what you could see with your naked eye. Back in 1599, everyone knew that the Sun, planets, and stars, were just lights in the sky that revolved around the Earth, and that we were the center of a little universe, a universe made for us. There was only one man on the whole planet who envisioned an infinitely grander cosmos.

There comes a time in our lives when we first realize we are not the center of the universe and as it happens to each of us, so it began to happen to our civilization in the 16th century.

Imagine a world before our telescopes, it was obvious that Earth was motionless, and that everything in the heavens, the Sun, the Moon, the stars, the planets, revolved around us, and then a Polish astronomer and priest named Copernicus, made a radical proposal. The Earth was not the center. It was just one of the planets, and, like them, it revolved around the Sun.

At that time, many people took this idea as a scandalous affront to Scripture. They were horrified. But, for one man, Copernicus didn’t go far enough.

He longed to bust out of that cramped little universe.

Even as a young Dominican monk in Naples, he was a misfit. This was a time when there was no freedom of thought in Italy. But Bruno hungered to know everything about God’s creation and he dared to read the books banned by the Church and that was his undoing.

Through those books, Giordano Bruno learned that the universe is unbounded, and so the cosmos must be infinite. This made perfect sense to Bruno. The God he worshipped was infinite. So how, he reasoned, could Creation be anything less?

Bruno then summoned up his courage and started traveling throughout Europe because he had assumed that other lovers of God would naturally embrace this grander and more glorious view of Creation.

Bruno was excommunicated by the Roman Catholic Church in his homeland, expelled by the Calvinists in Switzerland, and by the Lutherans in Germany.

Bruno jumped at an invitation to lecture at Oxford, in England. He thought this could be a good opportunity for him to share his vision with an audience of his peers but it didn’t go as he expected, because Bruno was ridiculed by the audience and blamed for heresy.

A wiser man would have learned his lesson but Bruno was not such a man. He couldn’t keep his soaring vision of the cosmos to himself, although the penalty for doing so in his world was the most vicious, cruel, and unusual punishment. Giordano Bruno lived at a time when there was no such thing as the separation of Church and State or the notion that freedom of speech was a sacred right of every individual. Expressing an idea that didn’t conform to traditional belief, could land you in deep trouble.

Recklessly he returned to Italy; maybe he was just homesick but still, he must have known that his homeland was one of the most dangerous places in Europe he could go. The Roman Catholic Church maintained a system of courts known as the Inquisition, and its sole purpose was to investigate and torment anyone who dared voice views that differed from theirs. It wasn’t long before Bruno fell into the clutches of the thought police.

This wanderer, who worshipped an infinite universe, languished in confinement for eight years. Through relentless interrogations, he stubbornly refused to renounce his views. Why was the Church willing to go to such lengths to torment Bruno? What were they afraid of? If Bruno was right, then the Sacred Books and the authority of the Church would be to question. Finally, the cardinals of the Inquisition rendered their verdict.

During the seven years of his trial in Rome, Bruno was held in confinement, lastly in the Tower of Nona. Some important documents about the trial are lost, but others have been preserved, among them a summary of the proceedings that was rediscovered in 1940. The numerous charges against Bruno, based on some of his books as well as on witness accounts, included blasphemy, immoral conduct, and heresy in matters of dogmatic theology, and involved some of the basic doctrines of his philosophy and cosmology. Luigi Firpo lists these charges made against Bruno by the Roman Inquisition:

He was found guilty of questioning the virginity of Mary, mother of Jesus;

He was found guilty of claiming the existence of a plurality of worlds and their eternity;

He was found guilty of questioning the Holy Trinity and the divinity of Jesus Christ.

He was found guilty of asserting the existence of other worlds.

When in the end he was officially blamed for heresy and so destined to be burnt in Campo de’ Fiori, Bruno responded to the court of Inquisition, “It may be that you are more afraid to deliver this judgment than I am to hear it”.

On Wednesday, 17 February 1600, in the Campo de’ Fiori with his “tongue imprisoned because of his wicked words” he was hung upside down naked before he was finally burned at the stake. His ashes were thrown into the Tiber river. 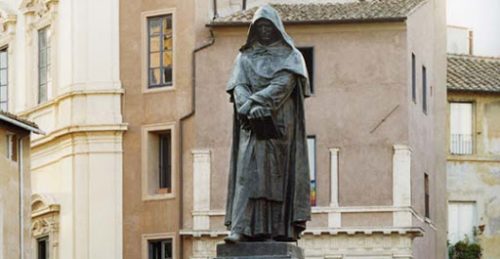 Ten years after Bruno’s execution, Galileo first looked through a telescope, realizing that Bruno had been right all along. Bruno was no scientist. His vision of the cosmos was a lucky guess because he had no evidence to support it.

Like most guesses, it could well have turned out wrong.

But once the idea was in the air, it gave others a target to aim at, if only to disprove it.

After his death, he gained considerable fame, being particularly celebrated by 19th- and early 20th-century commentators who regarded him as a martyr for science.

Bruno’s case is still considered a landmark in the history of free thought and the emerging sciences.

In 2.000 AD, Pope John Paul II made a general apology for “the use of violence that some have committed in the service of truth.