Even though what we see now during our COLOSSEUM TOUR, is merely its skeleton, the Colosseum remains one of the world’s masterpieces of civil engineering. Then why would sailors be needed here?

For the Colosseum to be the extraordinary arena we know, many people worked behind the scenes. In addition to the regular workforce, there were a very specific and unexpected group of professionals: sailors! It is not easy to imagine why sailors’ abilities would be required at 50km from the sea. Yet they were essential. The velarium can explain this.

The velarium -a “curtain” made of canopy- was a type of awning used in Roman times. Like other amphitheatres across the empire, also the Colosseum had its own velarium, the largest of all times. The “sails” were opened and stretched over the arena. They appeared as a sort of suspended structure. This allowed the covering of the cavea and part of the arena itself.

The structure had a ring in the middle that favoured the aeration of the amphitheatre.  Jets of fragrant water and essences were spread over the audience (sparsiones) and this helped attenuate possible unpleasant odours coming from the crowd.

The weight of the velarium

The structure weighed approximately 24 tonnes. Anchoring ropes on stone pillars counterbalanced this incredible weight. The pillars were placed in a radial pattern and some these stones are still visible. During our COLOSSEUM TOUR and our SUNRISE TOUR, we will show you these interesting remains. 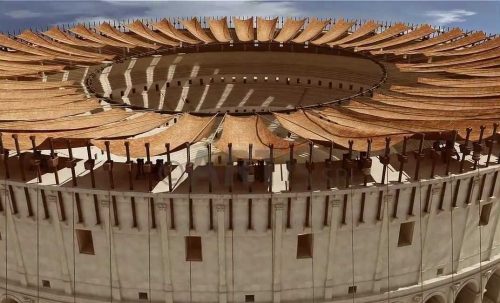 So why would there be sailors at the Colosseum?

Positioning the velarium required a highly qualified workforce. This is why the Colosseum needed sailors.  Over 1000 sailors from the Misenum fleet, with their background in sail-making and rigging, were employed to build, maintain, and operate the velarium.  An impressive “fleet” to be ashore!

The velarium is a masterpiece of engineering. During our EXTENDED COLOSSEUM TOUR, COLOSSEUM EXPRESS TOUR and UNEXPECTED ROME TOUR we can stop buy the remains. This is already worth the ticket!

For further information on any of our tours, please click HERE.