The Sistine Chapel hosted, for 25 times, one of the most secret and mysterious rites in the world: the Conclave.

Indeed, the conclaves have been held in what remains forever, in spite of the enormous daily influx of visitors and pilgrims, a papal chapel and a place fundamental to the identity of the Roman Catholic Church.

The Sistine Chapel is, for the occasion, furnished with 115 cherry wood seats, marked with the name and surname of each Cardinal Elector, and twelve raw wood tables covered with beige cloth and burgundy satin. Six tables are placed on the right and six on the left, arranged in two rows at different levels. Before the altar, below the Universal Judgement, a raw wood table will be placed for the urn where the votes will be collected, and a lectern holding the Gospel, upon which the Cardinals will pledge their oath. 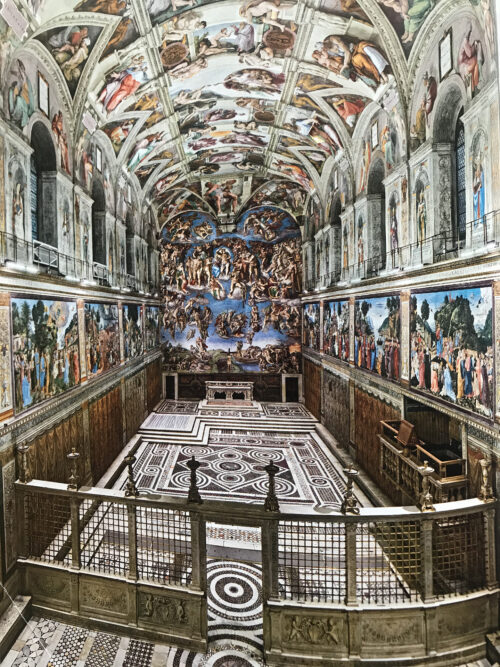 The Cardinals walk not on the floor, but rather on a flat wooden structure covered in beige cloth, 50 to 60 centimeters above the ground and at the level of the second step before the altar.

Following the tradition established in 1939 during the Conclave in which Pope Pius XII¹ was elected, the famous stove is situated behind the marble barrier. It is made up of two similar connected structures and is used to burn the ballot papers, emitting smoke from its vent. Indeed, the outcome of the ballots is made visible by the color of the smoke issuing from the chimney installed on the roof of the Sistine Chapel: black smoke when no majority has been reached, and white smoke to indicate the election of the new Supreme Pontiff.

To elect the Pope, a qualified majority of two-thirds of the Cardinal Electors is required. A simple majority of half plus one of the electors will therefore no longer be valid. After the 33rd or 34th vote it is obligatory to pass directly to a runoff ballot between the two cardinals who received the greatest number of votes in the previous scrutiny. However, even in this case, a two-thirds majority is necessary. Furthermore, the Cardinals who remain as candidates are not able to actively participate in the vote. If two-thirds of the electors vote for one of the candidates, the election of the Pontiff is canonically valid.

At this point, the last in the order of Cardinal deacons call the Master of Liturgical Celebrations and the Secretary of the College of Cardinals. The dean of vice-dean or the first Cardinal of the Cardinal Bishops addresses the elected candidate and asks: “Acceptasne election de te canonize factam in Summum Pontificem?” (Do you accept your canonical election as Supreme Pontiff?) and, upon receiving an affirmative answer, adds: “Quo nomine vis vocari?” (By what name do you wish to be called?), to which the Pope-elect responds giving his chosen papal name.

After the new Pope’s acceptance, the ballot slips are burned so that the classic white smoke may be seen from St Peter’s Square. At the end of the Conclave, the new Pontiff retires to the “Room of Tears”, the sacristy of the Sistine Chapel, where he dresses for the first time in the papal vestments in which he will present himself to the public on the central balcony of St Peter’s Basilica, the Loggia of the Blessings. The Room of Tears owes its name to the fact that – one assumes – the Pontiff weeps at the emotion and the burden of responsibility he will bear in the role he is called upon to assume. Traditionally, in the sacristy, papal vestments are provided in three different sizes, of which one should roughly correspond to the size of the newly elected Pope. After the prayer for the new Pope and the homage of the Cardinals, the “Te Deum” marking the end of the Conclave is sounded. The election of the new Pope is proclaimed by the Cardinal Protodeacon, who appears on the central loggia of St Peter’s Basilica and announces, “Habemus Papam“. The new Pontiff, preceded by the processional cross, imparts the “Urbi et Orbi” Apostolic blessing.