In this courtyard, the Pinecone is curious and seemingly out of place, yet it has undoubtedly become a symbol of the Vatican Museums and hides various legends. But why is it so important? And how did it get into the centre of one of the most important museums in the world?

The measures of the legendary Pinecone

Let’s start with the incredible measures of the legendary Pinecone. It is a bronze sculpture four metres high and two and a half metres wide, dating back to the 2nd century B.C. The representation is essential and massive. Publius Cincio Savio is the author.  The Pinecone probably decorated the Temple of Isis as a fountain in ancient Rome. 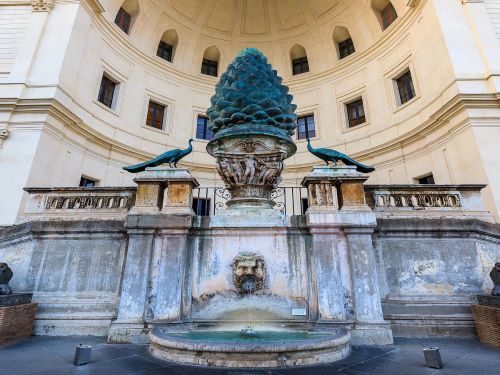 The current location and it’s history

The Pinecone, found in the Middle Ages in Rome in the area of the Baths of Agrippa in Campo Marzio , was placed where we see it now in 1608. The sculpture rests on a monumental block from the 3rd century, depicting the coronation of victorious athletes. On either side are two bronze peacocks from Hadrian’s time. These are actually two modern copies since the originals are preserved in the Braccio nuovo of the Museums. It is interesting to know that he double flight of steps leading up to the sculpture, was designed by Michelangelo, while the entire complex of the Cortile del Belvedere (or Pinecone Courtyard) is part of a project designed by Donato Bramante (1444-1514) at the behest of Pope Julius III.

The Pinecone has resided in Rome for almost 2000 years. It has closely accompanied the last millennium of the Church’s history. One of the legends would have the Pinecone as the “stopper” of the Pantheon’s oculus. The story says that when the temple was transformed from a pagan temple into a church, the demons inside flew away. In escaping they dergged the pinecone with them, leaving the famous hole in the dome.
Another legend claims that the Pinecone resided at the top of Hadrian’s Mausoleum and contained the emperor’s ashes.

Come to Rome and take one of out VATICAN TOURS. We’ll take you to the Courtyard of the Pinecone and share with you, the Vatican Museums’ Pinecone legends. Come and see with your own eyes. Come and #feeltheessence!