Created at the wish of pope Gregory XIII¹ and decorated between 1580 and 1581 under the direction of the geographer Ignazio Danti, the Gallery of the Maps in the Vatican is the largest pictorial cartographical cycle in the world. The gallery is frescoed with forty maps showing the Italian regions, the greatest seaports and some minor islands, while on the ceiling are painted miraculous episodes, linked to the maps below. The image that emerges from the cycle in the Gallery is one of Italy as it was at the end of the sixteenth century. A Country that was not yet a political unity but was already unified through the design of the Church and by a providential vision of history. 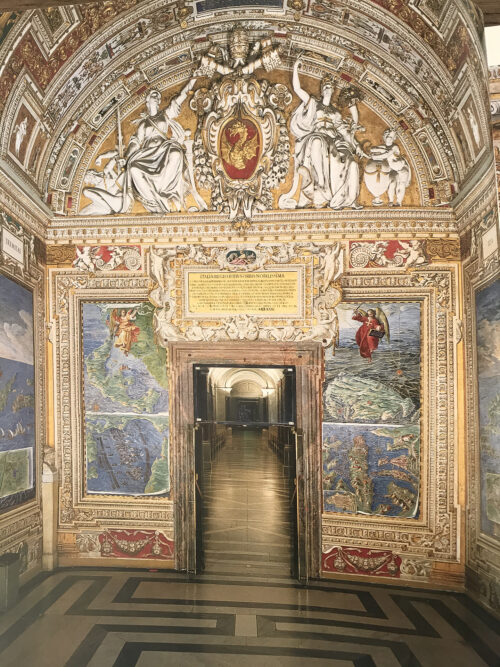 Visitors rushing along through the rooms in the Vatican Museums heading for the Sistine Chapel and the Raphael Rooms are unlikely to pay much attention to the frescoes covering the walls and ceiling of the long corridor on their way. But the frescoes covering these walls, with the Vatican gardens to the west and the courtyard of the Belvedere to the east, are one of the most extraordinary artistis achievements of the late sixteenth century. The Gallery of the Maps is one of the most impressive though possibly less well known of the numerous artistic and architectural treasures to have accumulated over the centuries around the tomb of Saint Peter.

One hundred and twenty meters long and six wide the Gallery was built at great expense, and in record time.

Ignazio Danti, the cosmographer and mathematician from Perugia, was in charge of the decoration and prepared the cartoons of all the maps but was assisted by a large workshop pf painters and plasterers including the notable Flemish landscape artist Mathias and Paul Bril, and two painters popular in Rome at the time, Gerolamo Muziano and Cesare Nebbia.

The complex symbolism apart, it is the maps of the Italian regions themselves that first capture the visitor’s attention with their enchanting, often naive, depiction, typical of early cartography: turquoise seas, busy ports, rivers and highways, woods, hills and plains, sometimes painted with surprising individuality, sometimes more formulaic but always accompanied by a variety of cartouches and inscriptions, offering solemn or frivolous historical, mythical or purely anecdotal information, about the lands and seas surveyed.

The most accurate depiction is given to the northern plain, to Liguria and Tuscany and the papal states between the Adriatic and the Tiber Valley, where Danti had done meticulous ground work.

The map where Rome is depicted is pretty precise, despite the absence of historical scenes, the region’s past is effectively evoked by the identification of many towns by their Latin names. The mountains are depicted conventionally but accurately; as with many of the rivers and nearly all the lakes. The network of consular roads, faded but still visible, is reproduced with great care. The outline of the coast wih its lagoons, along with the territories crossed by the Appian Way, are the best features of the map.

The bottom left corner of the Lazio map contains a semi-perspective view of Rome. The Vatican and Trastevere are clearly visible in the foreground. The accurancy with which the roads and monuments have been reproduced allows us to date this view to the first half of the 17th century.

The map is probably a synthesis of a number of views of Rome dating from previous eras. 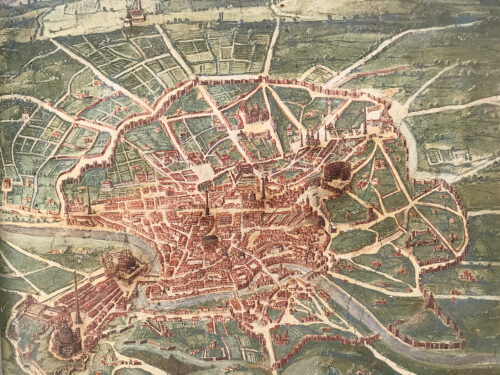 All our Vatican Tours pass through this incredible gallery, and our clients always remain impressed by the marvelous decorations of the walls and the ceiling. Everyone visits the Vatican Museums to see the most famous masterpieces painted by Raphael and Michelangelo, but the Gallery of the Maps always leaves everyone astonished.

You can’t miss one of our Vatican Tours to get a full experience of what Rome can offer, for more info click HERE